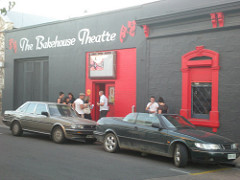 Matrophobia is the fear of becoming like your mother, and The Daughters Collective do a superb job of conveying the web of intricate reactions this conjures up. They achieve that Holy Grail of comedy with a show that is really funny and scarily serious in equal measure.
Three women each take turns in describing their mothers’ lives and how they feel about them. With dance and music and crisp, articulate dialogue they switch between being themselves and being their mothers, and on occasion it is difficult to tell which is which – such is the interwoven connection between them.
Another effective switching technique has the cast swapping between scenes that are rehearsed and choreographed, to scenes where they are being themselves in conversation with the audience and each other. It adds a degree of authenticity and sincerity that gives the overall performance greater credibility. It’s a tricky task, and works beautifully.
A scene that has them thrust into the future where, despite all their fears and misgivings they each have twins is hilarious. They engage in a manic episode of mutual adoration of each other’s babies, and then try and reclaim some semblance of fitness and sexiness in a gym like dance routine.
As a male it felt a bit like watching an initiation into secret women’s business at times, but it also gave me a greater appreciation of the complexity of women’s lives. I am normally loathe to concede that a woman’s life is more complicated than a man’s but after watching Matrophobia I’m not so sure. The biological imperative to have children and nurture and all the messy physiology that goes with it was forcefully and funnily presented here.
There is a bitter sweet balance of love and hate about their mothers that is honest, brutal and loving, and that is a tough mix to get right in a one hour piece of theatre. It’s refreshingly realistic, and all portrayed with great poise and depth of perception.
Younger women are going to find Matrohobia eerily predictive, but it’s a show that everyone can enjoy and learn from because, of course, we all have, or have had, mothers.


A fantastic piece of serious comedy that does not miss a beat. Smart, entertaining theatre.

(This review also published on The Clothesline.)
Posted by Michael at 11:55 PM