Lit Up Inside - Selected Lyrics of Van Morrison

(I have no idea if this review was ever published anywhere. Found it today in the archives so thought I'd put it on the record. Written early 2015.) 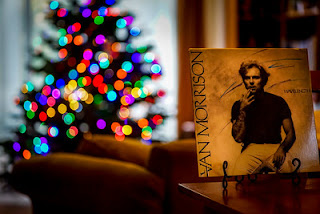 I wasn’t sure why someone would want to publish a book of lyrics these days. Lyric sites abound on the net and you can turn up the lyrics of any song you care to name for free in a matter of seconds. And initially I wasn’t sure either why someone would publish a book of lyrics of Van Morrison songs in particular. I don’t think of Van Morrison primarily as a lyricist. He’s a singer, and one of the finest of his generation. He changed the sound of much contemporary music forever with his unique brand of white soul. But he’s an emotional singer that relies very much on painting moods, and these moods are painted with words.

Before I opened the cover of Lit Up Inside I randomly chose a few of my favourite Van Morrison songs to see if they were included – Moondance, Tupelo Honey, Into the Mystic, Brown Eyed Girl, Wavelength - they’re all there. In fact, one third of all the songs he’s ever written are included. I started to remember beautifully sung phrases:

And then they just kept coming:

“Chopping wood; carry water
What’s the sound of one hand clapping?
Enlightenment – I don’t know what it is” (Enlightenment)

So I’m changing my mind now. I’d forgotten how many fine lyrical moments of his had permanently lodged in my memory and become part of my lexicon.

A foreward from Ian Rankin tells us that there were often ‘stories in the music’ of Van Morrison with characters and commentary, and many of his songs reveal a “search for the spiritual in the commonplace.” Indeed, you don’t listen to Van Morrison for very long before hearing evidence of his preoccupation of things spiritual. But it is not a religious preoccupation in the sense of having a set of beliefs he wants to share. It is more to do with exploring the uncertain nature of existence in the everyday. And he names those places of the everyday, and they are often in his hometown of Belfast. He was one of the first pop/rock writers to name local streets and bars and towns in song the way popular American songwriters have always done. He saw the value of his own place – “even somewhere as unpromising as industrial east Belfast…..can be offered as a place of potential spiritual wonder”. It didn’t need to be Chicago, or San Francisco, or Belfast for that matter. As Morrison sings of his life in Belfast I see and remember the streets and pubs and haunts here in my city that played the same role in my life. By naming parts of Belfast in his songs, he actually legitimised the local experience of people listening to his tales wherever they lived.

So the lyrics of Van Morrison can be studied. There are clear recurring themes – the metaphysical, the imagery associated with radio, rivers, and railways - and to trace the development of these themes it is handy to have them all in one place in a printed volume that can be held in the hand.

But putting rock or pop lyrics on a printed page devoid of their musical context has always been problematic. Lyrics become words stripped of some of their power. And repeated phrases like ‘ya radio, ya radio’ (at the end of Wavelength) written 12 times just doesn’t read well. And what to make of choruses like “Sha la la la la la” etc  from Brown Eyed Girl on the printed page? It helps to read the lyrics as streams of consciousness. You then get a sense of the connection between these lyrics and the poetry of the Beat Generation, and particularly with Allen Ginsberg’s Howl from 1955.

Van Morrison buffs will clearly appreciate this compendium of his lyrics, as will those who wish to study his contribution to rock writing. And it helped me understand why it is that I have enjoyed his music so much over the years. So I’m sold. On balance the words of his songs do have sufficient substance to justify being printed as a book.

“Rave on John Donne; rave on.”