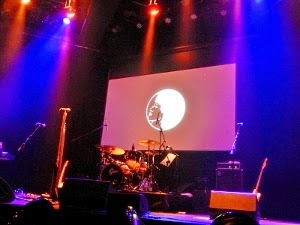 Till now I've ignored the annual Adelaide Cabaret festival. I figured it was something beyond my sphere of enjoyment and would feature music that I have difficulty relating to - principally jazz. But this year I took the plunge and learned a great deal, and have seen some awesome shows. Cabaret it seems is an all embracing genre that does not have a set format. I thought there'd be a lot of singer standing by the piano singing type acts. There was some of this, but there was plenty else besides.

Wikipedia defines cabaret as "a form of entertainment featuring music, song, dance, recitation or drama. It is mainly distinguished by the performance venue (also called a cabaret), such as in a restaurant, pub, or nightclub with a stage for performances. The audience, often dining or drinking, does not typically dance but usually sits at tables." So it doesn't really matter what's happening on stage. As long as people are seated around tables it can be cabaret. It's the type of venue that matters, not what's happening on stage. I have seen funk, pop, rock, blues, jazz, comedy and burlesque this week, and most of it has been brilliant.

Something else which seems to be de rigeur for cabaret, based on what I've seen over the last two weeks, is that there must be significant interaction with the audience. This may be jokes or humour, narration of a story or context that pieces together the musical interludes, wandering among the tables singing to or having fun with people, or getting people to sing along. So it's not just about playing the music. More is expected. You have to be an entertainer. I saw one show which fell down in this regard. Musically the show was wonderful. It would have been perfect as just a concert. But in this case the performer's entertainment skills were week. In a couple of others the entertainment aspect was great, but I didn't like the music! Not to say that the music wasn't any good - I just didn't like it. In fact it must be said that the standard of musicianship was outstanding.

Every show featured a lead performer, and they typically had brought a pianist with them, who was often the musical director, or other key musician. The remainder of their musical ensemble was made up of local musicians who may have had just one or two rehearsals before going live. This made the standard of musical performances even more impressive, but also resulted in some shows where the local musicians seemed a little disengaged from the stage act. They didn't laugh at jokes, or even look at the star act between songs. They were only concerned with making sure they had the right page of the score ready for the next song. And this is a bit weird when the entertainer is being very funny or outrageous and the reaction from the support musicians is zilch!

I learned along the way that this semi-impromptu method of doing live shows is quite normal for cabaret. The main act is often imported from out of town, and has to go live with a band they barely know, and vice versa. So there is always an element of uncertainty about the quality of the show. And some performers switch from other forms of theatre when you have practised being in character, and rehearsed everything down to the last detail, over months in the lead up to a live show. So cabaret always has this edge of the unexpected and unrehearsed. This was sometimes evident on the technical side of things too. The technical crew are always local, and have had precious little time to rehearse lighting, audio cues and the like. It all sounds a little stressful, but probably contributes to cabaret being a dynamic genre that is always evolving. But it also assumes an extremely high level of professional skill where participating musicians and technical crews need to execute their skills with minimal preparation.

With my minimal exposure to cabaret thus far I'm not sure how applicable this is to cabaret in general, but there seems to be a leaning towards the risque. I saw several very suggestive performers, and one who was outright erotic. But it's an intriguing genre where sexual or other bohemian behaviour is showcased in quite subtle, classy fashion. It can occasionally be crude, but generally this kind of behaviour from the edge of acceptability was suggestive, or naughty, or implied. It was not explicit or cheap. As Sven Ratzke said, cabaret is about sex with class, and where you don't need to be naked with a wrecking ball to be sexy!

Sven Ratzke's show, Divas Diva's, is one of two I'd like to mention as the highlights of what I've seen these two past weeks. You can read my full review of it here, but it was camp, sexy, a little outrageous, funny, reflective and musically outstanding. The other was Rocket Man by Rod Davies. Again, the review here tells the fuller story, but this was a masterpiece of entertainment combining music and narrated stories of Rod's life journey through music. The man should be regarded, and maybe already is by some, as a national treasure.

So now I know a little about cabaret. I know it is classy, that the standard of music is exceptional, and that it can vary widely in format and style. Each new show brought a different way of being cabaret, and from an audience point of view this is quite exciting because you're not quite sure what to expect. But I'm sure of one thing, if it's on the Adelaide Cabaret Festival program it will be very good. I may not like it, but it will be very good.

Some notes on a day of legendary speakers.

Sugata  Mitra - From a hole in the wall to the cloud: engaging your students to fulfil their sense of wonder and passion for learning

Most people will know of Sugata Mitra because of his now famous hole in the wall experiments with computers in India. I knew of these experiments but more recently latched on to his work when I came across this quote that he offered to explain how education globally has come to be in such dire straits: 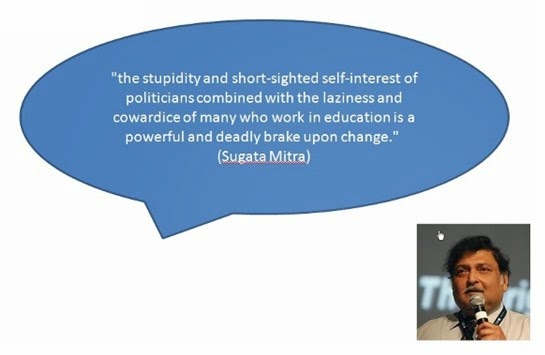 Is KNOWING (not Knowledge) obsolete?

He revisited this idea of asking whether we actually need to know/remember things anymore,  given that the Internet is constantly at our finger tips, and that the more important skill may be knowing where to find information when you need to know it. I was intrigued by Larry Sanger's refutation of this proposition some years ago, and offered my own comments in this article.

Mitra referred to the Reptilian part of the human brain that is concerned with threat and punishment and is the state of mind in which you learn least effectively; this is how we feel when we are tested in exams!

A new model of learning:

Mitra has funding to build 'schools in the cloud' (5 in India; 2 in the UK)

This was an inspiring presentation from someone who is daring to challenge traditional thinking about how students learn, and is refreshingly humble about his achievements. Several times during his presentation he said "I'm not sure" or "I don't know" but I think he's right about a great deal.

Just caught the tail end of this session. It was great to hear the renowned Elliot Masie talk in person. A few snippets:

·       unis don't necessarily meet the needs of industry; degrees aren't all that valuable (echos what employers often say about TAFE qualifications in Australia)
·       corporations want continuous learners, and more emphasis on evidence than ritual (eg PPT is a ritual and does not promote cognitive transfer)
·       wants 'aggressive learners'
·       the world does not present 'disciplinary problems'; so we need cross-disciplinary experts. (A theme Ken Robinson has often addressed. If we want to solve complex problems like climate change our education systems need to produce people who can contemplate such problems from multiple perspectives - scientific, sociological, economic, etc)

Wonderful to see another legendary educator talk in person! But as you can see from my notes below this session presented several questions that need further exploration.

In the US the salaries of degree holders has decreased 14% while at the same time the cost of a degree has risen 72%. (The same is likely to happen in Australia if the current government's planned deregulation goes ahead.)

Ken Robinson  - the usual :) Creativity, the Future, Innovation, Education etc. Or more precisely: Learning to be creative: how to teach and lead innovation, identify talents and revolutionise education

He spoke for more than an hour so it was great value for money. It was entertaining - as are all his talks that many of the audience would have been familiar with via his TedTalks, but in truth it was a little light on substance. That often seems to be the way with keynote speakers these days. They are there more to entertain than inform. Sir Ken did both certainly, and much of the audience showed their appreciation with a standing ovation but I had the feeling that it was just as much about acknowledging his contribution to educational debate over the years as it was showing appreciation for his address.

His book Out of Our Minds has been virtually rewritten.

In relation to the use of new technologies he made the point that
"If we can, we will." My explorations into cutting edge (and controversial) technologies has led me to the same conclusion. (See Where is the Internet Taking Us?) Consider drones, implanted technologies...


He bemoans the fact that contemporary educational administrators and policy makers are stuck on measuring outcomes to the exclusion of all else: "It's all about yield." Elsewhere he wrote:

"The dominant culture of education has come to focus not on teaching and learning, but testing...this...leads to a culture of compliance rather than creativity.“
http://www.ted.com/talks/ken_robinson_how_to_escape_education_s_death_valley.html

In organic farming the primary focus is on the soil. The educational equivalent for this metaphor is culture.

Children are borne as learning organisms eg witness the way they learn language. This can't be taught.

Cultural Filters:
When presented with a picture of a tiger in the jungle people from  Western cultures see a tiger (focus on individuals). People from Asian cultures see jungle (focus on relationship)
(from The Geography of Thought)

"The power is within our hands; we need to push back against those who wish to just measure yield."

He concluded with a wonderful short video of people in Paraguay creating musical instruments from rubbish.

Lovely to witness such a fine speaker ply his trade!