Back in 2008 Clay Shirky flagged the en masse arrival of the digital photographer in Here Comes Everybody. I’ve been thinking again recently about my daily obsession with walking the streets and taking photographs. I take photographs and I’m therefore a photographer, but I’ve never been comfortable with that tag. To me photographers are people who have fancy equipment, have studied or mastered the art of composition, know how to compensate for poor light, when to focus close-in or retreat to the panoramic level and so on. I can do some of these things – as far as a top of the range digital camera will allow – but the fact is I’m not really interested in mastering the technical side of photography. I take photographs sure, but I take them mostly for other reasons, and technical excellence is low on my list of priorities.
I have been looking for a word that better describes what I do. It could be something as simple as a visual diarist. It feels like what I do is a cross between photography and anthropology so perhaps I’m an anthropographer? And guess what? The word exists. Anthropography is “The branch of anthropology that deals with the actual distribution of the human race in its different divisions, as distinguished by physical character, language, institutions, and customs.” While that is close, that is just part of what I do. Then there is the similar related field of anthrotography:
"Specialising in the science researching the origins, history, and development of biological characteristics, social customs, belief systems, and indigenous linguistic variations of humankind. The anthrotographer takes photographs for the purpose of sharing knowledge and spreading joy."(https://aspicyphoto.wordpress.com/what-is-an-anthrotographer/) It seems to be a less accepted term than anthropographer and may have been invented by someone trying to do what I am exploring – exactly what it is I do with photographs.
Let’s look at the elements of each of these disciplines and see how well they describe what I think I do – or not.
I do take photographs of people of different cultures, and try and emphasise different physical characteristics. For example: 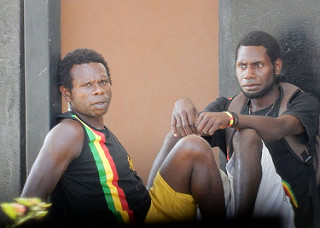 I try and capture examples of different linguistic traditions:

This has been a significant drawcard for me. Based on the assumption that your photos are shared with others – an essential element of the whole process – I was intrigued early on just how much random information I picked up from others’ photos, and what others could teach me about my own. It is common practice to ask the online community for assistance if for example, you don’t know the name of a bird or flower that you have photographed. Inevitably in time someone will provide the answer.
This can be the joy of learning; the joy of sharing photos of a shared experience, or joy in and of itself: 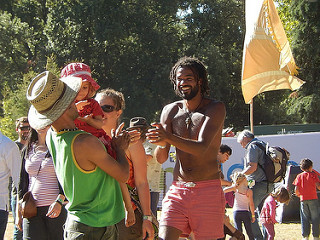 The anthro prefix in these fields of endeavour denotes the study of humanity. But what then with photos of landscape or nature? 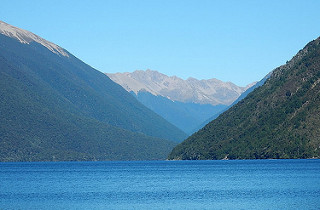 There’s no evidence of people present – deliberately so – so the anthro tag does not apply to all I do. So something that denotes observation of earth or nature needs to be part of the description. ‘Geo’ seems an obvious candidate but geographer is already taken, and I don’t want the anthro aspect completely sidelined. So what about anthrogeography? It does exist according to Google, but it seems to have been superseded by anthropogeography - a branch of anthropology dealing with the geographical distribution of humankind and the relationship between human beings and their environment. The relationship between human beings and their environment. This is getting closer. But I want a term that encompasses observation of humans and the environment or natural world not only in isolation, where they exist independent of each other, but also how they interact with the other.
While trying to decide what it is I do I realise that it’s about


And a final aspect that others have been quick to point out about my photographs – what happens when people leave the scene: the process of neglect, incremental change, and slow decay. It is a significant theme in my work but I think it can be included under the third point above.
Anthropogeographer sounds clumsy to me, and if anthrogeographer has been superseded I could reclaim it and redefine it. Or I could start brand new with geoanthrographer, but it’s difficult to pronounce.

“So you’re a photographer Michael?”
“No. I’m an Anthrogeographer.”
“What’s that?
“Someone who photographs people and places and how they interact.”
“Ah…interesting…’ J

I don’t expect to start a new movement. I could perhaps be accused of being a wanker. But I really do want a term that makes it clear that what I do is not based on an interest in photography as a technical discipline. I am much more interested in where photographs can take you; how one might use them to create a dialogue between us about the nature of existence. So for now, I’m a anthrogeographer! (This may change ;)

Thoughts After My Second Visit to a Tiny Island Nation 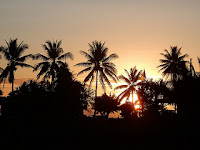 Tuvalu is a magical place. It’s like I’m smitten. But it’s an ambivalent relationship. Love the place but can’t wait to leave. Happily cruising back to Suva on a Pacific Thursday afternoon and feeling content to be going home to Elizabeth and safety. The remote location and the isolation that comes with it is hard adjust to. But I’m filled with visions of classic tropical enchantment. It reminded me of Kuta, Bali in 1973. Narrow roads through vegetation hiding houses and families and yards. The laughter and noise of family life wafts through to the road and leaves you with a half sketched out idea of what life might be like back in there.
But what you can see is an eclectic mix. And not everyone is going to come to the same conclusion. I see beauty, intrigue, relics, mysterious pathways that the children disappear into. You can see wrecks of cars and boats, piles of leftover building materials, empty squashed plastic bottles, rickety wooden platforms, assorted litter and a general inattention to tidiness. Basically it’s beauty or mess – both are there in abundance and it’s your call. You see what you’re looking for.
There’s barely a house on Funafuti that wouldn’t be classified as a slum or ruin in suburban Australia. Banged together collections of wood, plastic, corrugated iron, and always with a 4 poster covered wooden platform in the yard for families to hang out on in fresh air, in the shade, or out of the rain. Life is essentially held outdoors. There are some proper houses – wooden boards, louvres, a tin roof perhaps – but they too have the family platform, the litter, and the rambling dirt tracks winding back from the main drags. And everything ends at the sea. 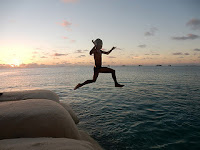 On average, Funafuti (Tuvalu’s main island) is about 100 metres wide so you can always hear the sea. The coast too is either a sad affair littered with ex-engines, left behind thongs or items of clothing on a charming foreshore that leads to a calm lagoon that is often glass like smooth. At dusk some make it a ritual to bathe, or in the case of young boys, jump around like monkeys off the sandbag groyne that’s there to help reclaim land. Pure unadulterated children in paradise stuff. A joy to behold. And they happily share it with you the stranger – showing off their best moves and flashing full faced smiles.


About 100 metres away, just short of the other – ocean – coast, the 15-40 year olds gather on the town’s runway for the daily sport carnival of rugby, volleyball and soccer. Barefoot they bound around the warm tarmac throwing themselves at various balls. All again with copious dollops of laughter – a signature of Tuvalu. A true tropical paradise.
at December 03, 2016 2 comments: