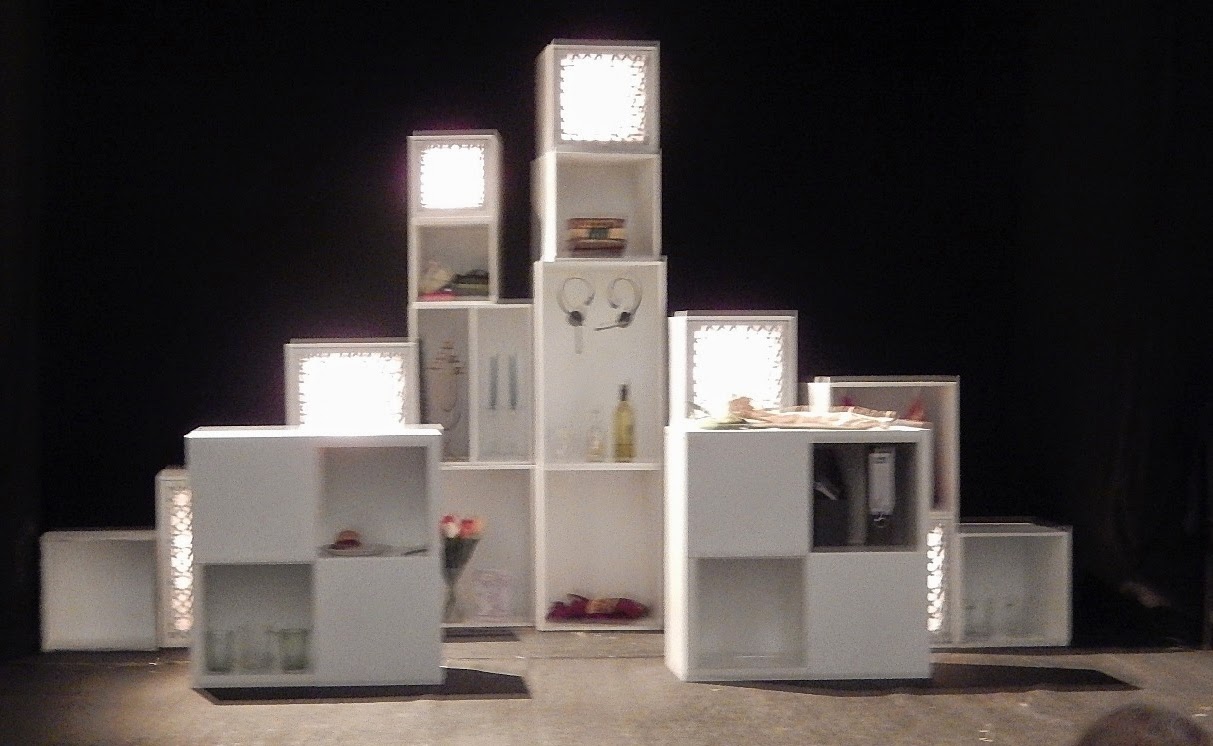 Mush and Me was handpicked by Holden St Theatres to be part of their 2015 Fringe program, and it’s easy to see why. Gabby and Mush(taq) meet on neutral ground in an English call centre. The company’s star performers in telephone sales are drawn to each other as they observe each other in action. Their good natured competitive relationship quickly becomes social and despite the cultural and religious gap between them they find themselves falling love.

Provoking and challenging each other about the foolishness of their respective beliefs just brings them closer, and the time arrives when they have to confront whether to announce their romance with their families. The scene that has both of them coming out to their families simultaneously is beautifully crafted.

The difficulties of their cross-cultural relationship are a microcosm of what divides Arabic and Jewish culture. No matter how great their affection for each other layers of past hurt and suspicion complicate their present. ‘Enough of the past” Mush cries out to his mother - desperate for her to understand that not all Jews are wicked.

The obvious attraction between to the two protagonists is beautifully played by Daniella Isaacs  and Jaz Deol, and moments of passionate disagreement and anger typical of Middle Eastern discourse about ‘the problem’ are equally powerful.

A simple and effective set of white shelves displaying icons of both Muslim and Jewish culture are manoeuvred around the stage to accommodate the call centre, a bar, a hospital and lounge room, and at times has both actors pushing shelves together in the dark during scene changes that is neatly symbolic of them growing closer together.

Given the state of the world and the role of their respective cultures in global politics, this is a timely offering. We can enjoy the fact that at least two people have decided to ditch the hatred and pain of the past between their peoples and focus on their mutual love in the present. But we are left with no illusion that it will be an easy road for them.

(Also published on The Clothesline)

The Searchers’ concert was always going to be a walk down memory lane. First formed in 1959 and responsible for a half dozen or so mega hits in the Sixties, The Searchers are still performing to packed houses around the world fifty-five years on. The two remaining original Searchers, Frank Allen and John McNally are in their 70’s. That puts them in the elite category of veteran pop/rock stars who are still performing in the same band decades after they began. Another band that comes to mind in the same category and who also graced Australia’s shores recently are of course the Rolling Stones. But that’s about where the similarity ends.
The Searchers represent the state of pop/rock music before the likes of The Beatles and The Rolling Stones turned it and the rest of the world on its head. Neat, suited, and conservative, they stand and deliver that same engaging brand of poppy tune that catapulted them to pop fame, and in pretty much the same way. Not much rocking or wild cavorting around the stage here – just standing and delivering. And that is entirely appropriate for their style of music.
They play all their hits – the biggest of which arguably were Love Potion No 9 and Needles and Pins – and they still sound brilliant. There was also Walk in the Room, an acknowledged classic originally written and recorded by Jackie DeShannon but driven to international fame via The Searchers’ version. A curious thing about The Searchers is they didn’t write any of these songs. Occasionally songs were written for them, but most of their success came from songs written or recorded by others before The Searchers turned them into hits. And as good as these songs are there are probably around 6-8 gems all up. So the playlist for their two hour concert includes many cover tunes. Del Shannon’s Runaway, Buddy Holly’s (apparently spontaneous) Peggy Sue were obvious choices from their era. A kind of reverse acknowledgment of The Byrds and the role they played in preserving The Searchers’ legacy for another decade or so was the reason for the inclusion of Mr Tambourine Man. (The now famous signature ‘jingle jangle’ guitar tone of The Byrds was first created by John McNally, and The Byrds always acknowledged their debt to The Searchers as their own fame grew.)
A few numbers were clearly included to highlight and exploit the lovely voice of Spencer James – Roy Orbison’s Runnin’ Scared, Neil Sedaka’s Solitaire, and Bette Midler’s The Rose. But the inclusion of Young Girl, originally recorded by Gary Puckett and The Union Gap had me puzzled. I loved it when I was a child, but these days it has a few unfortunate undertones.
The voices of the two original Searchers are still in fine fettle. Sadly though there was a muddy tone to the mix much of the evening with the vocals too far down in the mix and for a band whose songs depend on multiple vocal parts this was really disappointing. Ironically the time when the three singers could be heard most clearly was not on a Searchers song – they sounded clear and pitch perfect as they sang The Rose.
Bass player Frank Allen chatted to the audience throughout the show, filling in bits and pieces of the band’s history, and explaining why each song was chosen. Audiences really appreciate this thoughtful kind of communication. But I found the constant jokes about aging, illness, dementia, etc a bit tiresome. As I’m a way short of 70 maybe it’s something I need to grow into (!) but I’d be pretty sure the Stones weren’t cracking jokes about nursing homes and dementia on their recent tour.
Still, it was great to see, be present, and hear live The Searchers’ contribution to the legacy of pop music. It’s a phenomenal achievement to be still doing live shows after 50 years. Testament to their importance in the history of pop is the fact that several Searchers songs will be remembered long after they finally hang up their guitars. An enjoyable night.

Also published at The Clothesline