In the fields of eastern Ukraine......

When I see images of the recent Malaysia Airlines disaster I cry. I felt even more moved today when I saw the cavalcade of hearses taking the bodies to somewhere in Holland to be identified. I didn't know anyone on this flight, nor am I connected or related to those who lost their lives in any way. So why am I feeling like this?
Is it because I've been to Holland many times, have lived there, have many friends there, my son lives there?
Is it because I'm a traveller and frequently use planes to get around?
Is it because there were so many Australians among the dead?
Is it because I have flown Malaysia Airlines many times and they fly into my home city of Adelaide?

It's probably all of these things on some sub-conscious level, but from the outset of this disaster I have been quite frankly gob-smacked at the stupidity and callousness of those who shot this plane down, and patrolled the fields of death in eastern Ukraine like cowboys. Keeping those with authority and expertise from properly investigating the site, picking through the ruins, standing on  the tail of the downed plane, removing parts of the plane from the scene, displaying souvenirs of the dead passengers, looting their belongings, and most offensively of all leaving bodies out in the elements and then dragging them around when it finally occurred to them that they should do something about it.

I just find this whole litany of ignorant activity beyond the pale for the 'civilised world' of 2014. This is Europe for heaven's sake. Where is the respect for the dead? Where's the sorrow? Or an apology even? It doesn't matter who did it - Russian backed separatists or other Ukrainians - no one involved has expressed sorrow or regret for the death of 300 innocent people who had nothing to do with this conflict. But I guess I'm not surprised at that. What has amazed and shocked me is the fact that the guns weren't buried and disagreements put aside immediately to take proper care of the dead. Instead both sides maintained a stand-off, played the blame game, rifled through the possessions of those they'd killed, and left bodies to rot in the sun. The world watched (well I did anyway) in disbelief and tears.

But today we saw a different story. Each survivor was taken off a plane in Eindhoven by people in uniform in dignified and solemn fashion, and each of them rode alone in their own hearse through streets lined with people marking their passing in silence, shedding tears, and strewing flowers on the passing hearses. It didn't matter who they were or where they came from - they could have been Dutch or Australian or Malaysian.  What mattered is they were human; they were like us, and this is how the dead should be treated.

Holland showed its class today. On behalf of the civil side of humanity they enacted a ceremony of great respect that showed that human lives are valued in a way they were not as they were left lying in the fields of eastern Ukraine.

So, as I watched the cavalcade carrying the unknown dead through the streets of Holland, I cried for a different reason. I cried because at last someone had realised how important these last rites are for all of us, not just for the families involved, and acted on it with dignity and grace. Bedankt Nederland (thanks Holland) for restoring some dignity to the world today.
at July 24, 2014 2 comments:

A Stunning Night of Strings

This was a case of the support act nearly stealing the show. The curtain opened on the glorious sight of 26 guitarists in brightly coloured shirts seated and ready to play. Their composer and musical director, Paul Svoboda, raised his arms for quiet, waited a few appropriate seconds, then launched the Aurora Ensemble. What a beautiful sound. Svoboda himself is mesmerising as he choreographs his players with precision and grace. If I closed my eyes I could hear an orchestral string section. At times I heard wind instruments, and a piano. But I'd open my eyes again and there were just guitars. Beautifully played guitars and superb arrangements. Quite simply some of the most uplifting music I've heard in years.

Enter the Australian String Quartet (ASQ) and Slava Grigoryan to play a piece by Australian composer Shaun Rigney. Modern and experimental, it took some getting used to. It seems a difficult piece to play, and I imagine it might be one of those pieces that is more fun to play than to listen to. ASQ were not so much playing together on this disjointed and occasionally discordant piece as keeping out of each other's way. As violin one swapped parts with violin two who handed over to cello who had its lines completed by viola it bounced around quite frenetically at times, and in the quieter moments or gaps there was the guitar holding it all together. Fascinating to watch and enjoyable to listen to, but more music for the head than the heart perhaps.

Spain's classical guitar superstar, Pepe Romero, joined ASQ next and treated us to Luigi Boccherini's 'Fandango' from the late 18th century. In contrast this was a much brighter and more harmonic interlude with the guitar parts more integrated into the composition. There were also fine moments that showcased the difference between bowed strings (violin, cello) and plucked (guitar), and how deliciously complementary they are.

The Maximo Pujol Trio from Argentina were the final featured act and delivered sensuous moments of tango. The interplay here between Pujol on guitar and Eleonora Ferreyra on bandoneon, a type of concertina, was a joy to behold and listen to. It was just like the instruments were talking to each other. It also felt European, but it was actually music from the 'Paris of the south' - Buenos Aires. 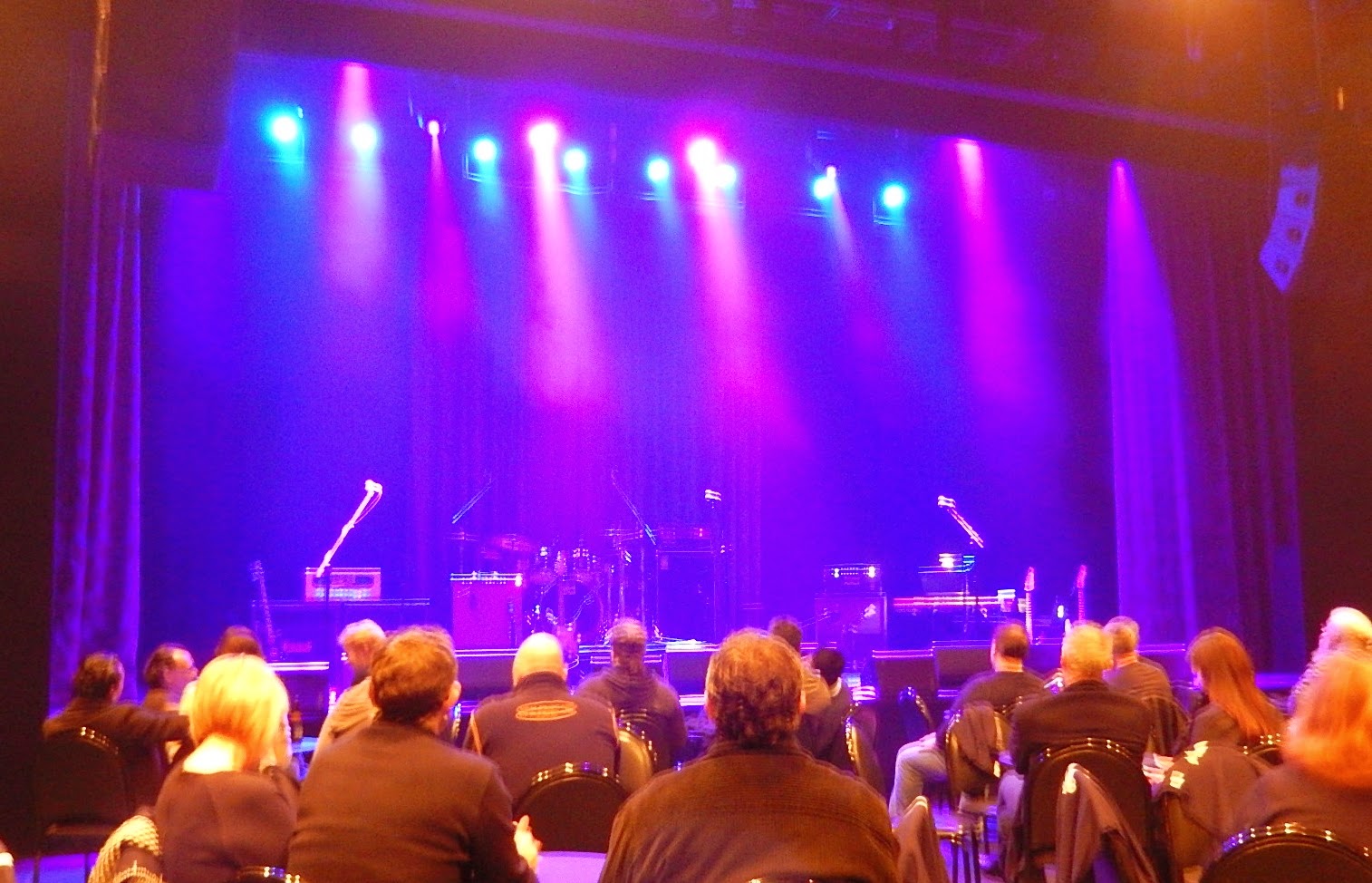 
Who would have thought that wild and untamed electric guitar from the rock gods of the seventies and eighties would still be with us in 2014 (my mother told me it would never last), and would even be featured at a high profile cultural event in the city's premiere theatre?  But so it was last night at the Late Night Session of the Adelaide International Guitar Festival.

Three guitar shredders took  the stage in turn to demonstrate the power of the electric form of guitar. Whether you like it or not, the electric guitar is a remarkable instrument. As  well as being able to weep (George Harrison) , talk (Bruce Springsteen, Thunder Road), Cam Blokland, Marcel Yammouni,  and Simon Hosford got their guitars to wail, scream, screech and soar in a powerhouse display of guitar wizardry.

Local lad, Cam Blokland was up first. Looking every bit the rock star with long hair and sunnies (he's  the guy in sunglasses on the festival's promo poster) he reeled off a number of original 'songs' with occasional glimpses of melody (I liked the one his Mum liked), that were mostly showcases for his incredibly nimble fingers. His self-deprecating send-ups of the body language of rock guitarists was a nice touch too. Marcel Yammouni followed with a slightly less frenetic  performance that involved less notes and more space, more moments of what might be called melody, and indeed some subtlety. He dedicated one of his songs to Johnny Winter, the legendary Albino Blues guitarist who had sadly died earlier in the day. But then Simon Hosford  blew all notions of melody and subtlety out of the water with an onslaught of speed and a percussive style that was not so much music as an exploration into the power of electricity.

Seeing guitar played by these three maestros of this genre was an assault on the senses, and one can't escape the fact that guitar played like this is an extension of ego - how can one person make so much noise/be so loud? But as Simon Hosford said, "this is about as much fun as you can have standing up!"  I really enjoyed the show, but it was strange to see and hear this kind of music where no one was dancing (there was barely even any discernible rocking of torsos as I looked around the room), there was no superstar hype surrounding the personas of the guitarists, and no screaming fans. It was all very serious and studied. It seems wild metal shredding guitar has come of age.

And kudos to the fantastic band members supporting the guitar tyros - they were a show in their own right. Keyboard and bass and drums all got to do solos, but it was the drum solo that took me back - vintage!

Now for a little classical baroque at the other end of the guitar spectrum.......