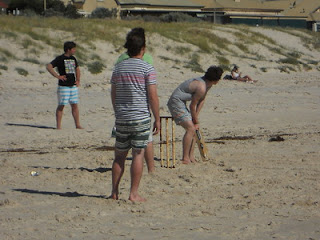 Perhaps Greg Champion’s biggest claim to fame is being part of an ABC radio show that has been running for 40 years - the Coodabeen Champions. Author of one of many contenders for what couldabeen the national anthem – I Made A 100 In The Backyard At Mum’s – he’s a very funny man. Raised on the Hectorville tablelands (que?), he left Adelaide sometime in the distant past to seek fame and fortune with Adelaide band The Fabulaires, but somehow stumbled into the growing new field of musical sport comedy and has been there ever since. Or actually, he might have invented it!
40 years of live performance on radio and stage has yielded a performer very much in command of his quirky genre. His forte is writing satirical lyrics to well-known tunes – whether it be poking fun at Port Adelaide fans (something he does quite a lot of!), or the clichés coaches use in talks to their players. Another odd but considerable talent is the ability to play with the sounds of language in song – tongue-twisting Australian place names for example, or stringing together French words and phrases stolen by English.
Though he’s been living in Victoria for decades he says he still calls South Australia home and of course he has a song about it! Lots of wonderful local content that wouldabeen useless performing in any other state. He draws material from some of the more whacky listeners to Coodabeen Champions over the years that sometimes have better memories of songs he has done in the past than he does, and have also provided snippets of wisdom that occasionally made sense, or even if they didn’t were funny anyway.
This was a delightful show. Despite what he said, there were several people in the audience under 85 and we all laughed a lot. I don’t know why there weren’t more people there – there shouldabeen. Maybe they’re too old to get out? Or dead? Perhaps the audience for someone who makes jokes about football is too small? No matter – their loss.
And besides, it’s not just about football. The finale featuring several alternative versions of the National Anthem didn’t mention football once and was still hilarious. No couldabeen about it, he’s a comic champion.

(This review also published on The Clothesline)
at March 01, 2020 No comments: