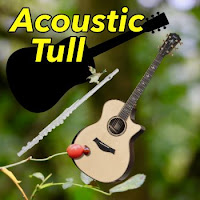 After going live 9 months ago Acoustic Tull finally have our first independent review – 4 stars from The Upside Review. Quite pleasing actually. I’d been thinking that if I was reviewing our show I’d give us 4 stars!
It’s been a wonderful musical ride thus far. There are many wonderful moments but I think for me it’s when I hear that flute fluttering at the beginning of The Witches Promise or that signature melodic motif in Thick as a Brick I just feel a smile inside in recognition of how good it sounds and feels. These wonderful flute sounds are courtesy of Kerryn Schofield – how lucky we were to find her!
You can read more about the group and how it came about over at our website. There are some videos there as well. There’s also an interview I did that talks more about who we are. There are a few photos on our Facebook site but if you search HERE you should find several photos of us performing.
We have about 30 songs in our repertoire now. Our next gig with our full repertoire will be at current ‘home’ – the Duke of Brunswick hotel on May 23rd.
We have just concluded two sell out shows at the AdelaideFringe – quite an achievement as many shows/venues are reporting lower attendance figures this year. Our Fringe show was much shorter (75 mins) and included some cabaret style elements to make it more Fringe suitable.
Jethro Tull have often included mythical characters in their songs and live performances and we decided to feature one of our own for our Fringe show. We had a friend dressed as an old homeless guy wander through the crowd as we played Aqualung and sit himself down on a bench in front of the stage and read the Thick as a Brick album cover (newspaper) as we played our version of this classic..
The idea was for this old Aqualung character to be totally anonymous and unacknowledged, as homeless people often are, and so we completely ignored him and played on as if he wasn’t there. It seemed this little theatrical cameo was a successful complement to our show but it did raise interesting questions about why we did it.
The questions that were asked with brief answers:

W here did this idea come from?

Tull has a history of using mythical characters in song, on stage and in videos. Reference to the vulnerable and disenfranchised is a recurring theme in Ian Anderson's writing. So the old man character was to reflect what Tull have done for years.

·         Is it merely for visual accompaniment to the song? NO
·         Is it meant to confront the audience with their own prejudices and stereotype notions of the homeless and destitute? YES
·         Is is designed to elicit emotions of sympathy - YES
·         Do you want the audience to be chuckling and sniggering, or squirming in their seats with discomfort?- NEITHER; JUST WONDERING WHY
·         How many of the audience I wonder would have gone away with a different (sympathetic) attitude to the homeless? MOST HOPEFULLY
·         Would the song be better served by a shocking slide show that portrays the injustice of the poor and abandoned? NO. THAT WAS NOT TULL’S WAY. TOO DIDACTIC
·         Was this just playing a practical joke at the expense of the disenfranchised? DEFINITELY NO