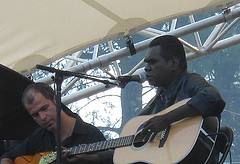 There was a moment at Womadelaide a few years ago when Gurrumul silenced a crowd of several thousand mostly white Australians with songs sung in ‘language’. We had no idea what he was singing about, but we knew somewhere it was about things like hills, stories from the Dreamtime, ancestors – things of antiquity. He was the voice of ancient Australia and he had us in the palm of his hand. It was one of the most profound cultural moments I’ve ever experienced. And this concert was another night of magic with this remarkable singer. Billed as the gospel songs tour, it featured several songs from Gurrumul’s past on Elcho Island that are more like hymns than the gospel sounds one associates with black America.
The show began with safe territory – two of Gurrumul’s better known songs – Wiyathul, and Bapa, a dedication to fathers everywhere, and they set the inspirational tone for the rest of the evening. When long time Gurrumul collaborator Michael Hohnen announced that they were now going to play the religious tunes it seemed a little superfluous, as these songs are deeply spiritual in the effect they can have on an audience.
Nevertheless, local Adelaide choir Women with Latitude joined the band for the religious/gospel part of the set and it’s a match made in heaven. They provided a beautiful soft backdrop to Gurrumul’s timeless vocals, embellishing every note with a restrained ethereal presence. When they did crank up the volume later in the show on a Gurrumul original, while singing in his native Yolngu tongue, the whole effect was superb. It was quite noticeable too that as soon as multiple voices are added to Gurrumul’s songs you can hear the link with the islander music of the Pacific.
There is something intangibly primal about Gurrumul’s ability to cut across Australian cultures with the voice of a songbird that soothes and caresses and delivers you to a place of immense joy and deep satisfaction. He is an extraordinary gift to this land.


Another original song, The Crow, was richly textured and again showed Gurrumul’s ability to portray simple symbols from the world of nature in a way that all Australians can appreciate. A catchy reggae tune closed out the evening. Just the standing ovation was left, which of course Gurrumul can’t see. I hope someone tells him about it. But my guess is he can probably sense it.

Also published on The Clothesline
Posted by Michael at 11:31 PM No comments: