Are WOMADelaide and the Adelaide Fringe Losing Their Soul? 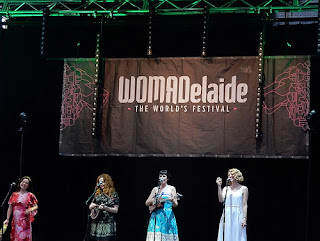 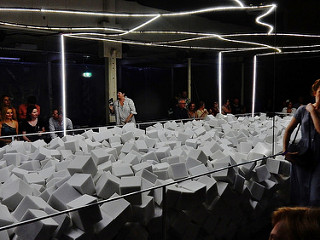 
Five concurrent plays performed simultaneously in a pit of foam rubber on the site of the old Clipsal factory. Sounds like a recipe for total confusion but no, it was surprisingly cohesive.
Four years in the making by drama students from Flinders University this production explores the themes of alienation and information overload in a hyper connected world. It takes a while to sort out who’s talking to who but once that’s achieved it was easy enough to take turns focusing on the conversations that criss-crossed the performance space – in much the same way we’ve learned how to digest the information we want to hear from multiple streams of media in the contemporary world. It’s a cacophony if you try and take it all in, but quite manageable if you split your focus to those parts you find more interesting.

Two online gamers at opposite ends of the space did a great job of remaining connected. A couple who share a pregnancy are not sure how close they want to be. An earnest young man espouses the virtues of the Bahai religion on his YouTube channel, and gets side-tracked into another play when he spots a young woman who he feels is in need of spiritual assistance.
At several junctures the conversations dovetail as if they are on the same wavelength before drifting off again into separation. “We are all connected.” These could be random coincidences or a higher power exercising subliminal control.
It’s an intriguing premiere of a brave concept. Beautifully played, and artfully directed by Nescha Jelk, it subtly increases the level of angst until the various characters are eventually driven to physical closeness in a chaotic finale.
A really enjoyable spectacle and experience. The minimalist lighting was eye-catching and super effective, and there’s a delightful irony in the fact that this fable of modern life takes place in a relic of an industrial era that’s coming to an end.
(also published on The Clothesline)
Posted by Michael at 10:04 PM 2 comments: Links to this post 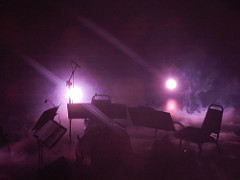 Wikipedia tells me Exquisite Corpse is an old parlour game where people used to take turns writing stories by building on the work of the previous player. For this project the idea was extended to include twelve composers and two visual artists. Each composer built on the last piece of musical notation from the previous participant to create a collaborative score, and the visual artists did similarly.
It is important to understand the collaborative nature of this work to appreciate the final product. If it at times seems fragmented it’s because no one composer had an idea of what the final piece would sound like. Given the circumstances, it’s remarkable to say that it did by and large come across as a unified work, and that’s due to the artistry of the Zephyr Quartet. Two violins, a viola and cello bow, pluck and strum their way through a frequently changing soundscape that has many moods. I preferred the moments where all instruments were being bowed in traditional fashion but the experimental passages were often more rhythmic, and it was intriguing guessing where it would go next.
And then there were the visuals. Projected on screen throughout were a series of bizarre drawings of a surrealist world that reminded me of the animations of the type that the Monty Python team made famous. The Python versions we know were harmless fun and devoid of meaning. But what of these? Did they mean anything? Were they connected to the music is some way, and if so, how? While quite charming and often amusing (it didn’t seem appropriate to laugh) I ultimately found them intrusive. Rather than complement the musical score, I was being distracted. They were too assertive; too pronounced in their presence.
What worked well were the coloured tubes that snaked around the stage and emitted various hues and frequencies to create a pleasing aura of colour and movement around the quartet. For me, this was all the visual effect I needed.
It was like being at two performances – one musical and the other visual. I could enjoy one or the other, but not both simultaneously. But kudos to the Zephyr Quarter for this brave idea – musically it largely worked for me, but overall it felt like a metaphor for modern distracted life: there’s just too much going on.

Adelaide Entertainment Centre, Tue 1 Mar, 2016
In truth John Cleese and Eric Idle could have served up anything and I’d have been happy. I just wanted to pay homage to these comic masters who together with other members of the Monty Python team turned comedy on its head 40-plus years ago. The good news is they are still masters of comedy. 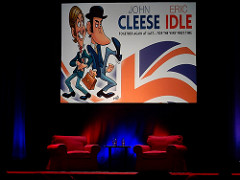 Things began unconventionally of course as we hear Cleese muttering that we don’t have to start on time and we can just show them some videos. So we got five minutes or so of a greatest hits collection of some of their best work before the stars of the show sat down for a relaxed chat about how the Python crew met, and the early shows they worked on with Peter Sellers and David Frost et al.
They then swapped stories about their favourite sketches from the past – complete with video clips. It was fascinating to hear them critique each other and comment on what they each considered was their best work.
Two live sketches followed and showed they haven’t lost any of their comic timing and sense of the absurd. Great stuff.
After interval John Cleese talked about the nature of comedy, what makes people laugh, and his love of the dark side of the genre. A string of politically incorrect jokes targeting various racial groups followed and Cleese drew spontaneous applause when he lamented the inability of contemporary society to distinguish between what is just teasing in good humour, and what is racist and mean spirited.
Eric Idle returned guitar in hand to demonstrate what a capable player and very fine songwriter he is – even if his songs are by his own admission a little on the filthy side.
They joined forces once more for a Q&A session with the audience and provided quick and witty off the cuff answers, and more good natured banter about the other Pythons – especially Michael Palin! Contrary to what is sometimes reported it is clear they have a great deal of respect and affection for the other members of the Python team, but that doesn’t mean they don’t make jokes about them at their expense!
The show predictably closed with the song that has become the most requested song at British funerals and we all sang along karaoke style.
An insightful, entertaining, and very funny show chock full of stories, jokes, sketches, videos, and songs that revealed their enormous comic talent. The Python era may have been their peak of commercial popularity, but they are still quite simply very funny guys who love making people laugh. “Say no more.”

Posted by Michael at 11:18 PM No comments: Links to this post