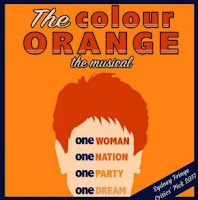 Pauline Hanson may have drifted out of the news again lately, but she is still rich fodder for humour. And in this case the perfect subject for musical comedy. No wonder Flaming Howard Productions got the Sydney Fringe critics’ nod for this show. It’s wonderful.
It must be said upfront that they should be playing at a much larger venue because  1) they had difficulty fitting themselves all on stage (the drummer was off stage and unseen!!) 2) they deserve an audience of hundreds.
This is a full tilt musical. A five piece band, and five singers/players. And they were all great – there is no suggestion of a weak link anywhere. The songs were infectious and funny, the singing was marvellous; staging and choreography spot on, and costumes all eye-catching and appropriate.
And then of course there’s the story of the woman we all love or hate. Tracking through Pauline’s political life from 1994 to the present, we meet various characters who have assisted her rise and fall and rise again along the way: co-founder of the One Nation party, David Oldridge; when jilted he goes off bleating to a vindictive and narcissistic Tony Abbott, who is made to look and sound even more ridiculous than he does in real life - superbly played. Other famous redheads are featured – Todd McKenny in his role as co-host of Dancing with the Stars, and ex-PM Julia Gillard gets a brief cameo.
The various players who took turns being Pauline all did a great job. As did the whole cast. Like I said, not a weak link anywhere. Writing, direction, staging, singing, acting, and musical arrangements all come together in the hands of very talented cast and deliver a show that is upbeat, energetic, classy (in a fish and chip shop sort of way) and funny.
And just in case you thought it’s not right to elevate this woman to national icon status in routines of harmless fun, we are sent home with a serious reminder of how this all came about.
I can’t speak highly enough of this show. Level of difficulty – 10.  Do yourself a favour and go and see these heroes in Pauline’s story. They deserve a crowd.

(This review also published in The Clothesline.)

Posted by Michael at 9:57 PM No comments: Links to this post

THE CHOIR OF MAN

The Flamingo at Gluttony, Tue 20 Feb 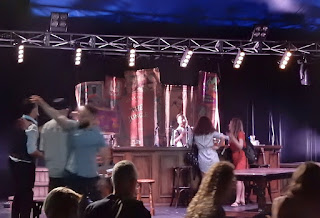 There was already a lot happening on and around the stage as the audience shuffled in to the venue for the Choir of Man. It seems we’ve entered a pub, and it’s bustling with activity. Some people are ushered to the fully functioning bar to get a drink, and the show begins.
The Choir of Man are nine men welcoming you to their local. We are introduced to all of them in turn – the talker, the dreamer, the womaniser – time is taken to sketch out a little of each of our guests. This is a pub where you will not be a stranger. If you come for a drink you can sit in silence, talk your head off, or just chew the fat, but you will not be alone.
Most of the musical material is not unaccompanied. Each of our hosts take turns in leading the next song, often accompanied by guitar, piano, ukulele or other instrument. While this adds great variety to their arrangements it also presents some staging problems. It’s always difficult to balance multiple moving sounds in a tent but as engaging and joyful as they were, the songs with instruments didn’t showcase their vocals well enough – I wanted the voices louder. In the unaccompanied pieces their voices rang out loud and true and showed how they good they are.
The Choir of Man has other things to say apart from their music. Don’t sit with your woes alone, don’t keep things bottled up inside. Share your feelings, and if it’s your turn to listen, then listen. “When the choir is working well it’s because we are listening.”
If you’re lucky you’ll be one of many audience members who scored free beers (yes – they give away free beer!)
The show just got better and better as it went. A great communal vibe, lots of positive energy, and infectious music. Go and spend some time with the Choir of Man. You’ll go home feeling much better.

(This review also published in The Clothesline.)

Posted by Michael at 9:47 PM No comments: Links to this post