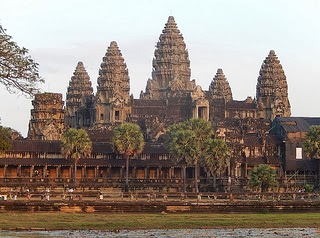 Siem Reap could easily be  a terrible place but it's not. So many thousands of visitors pour through each week en route to the ancient temples of Angkor Wat and surrounds that it could easily cave in to tourist tack and sell its soul, but so far its soul is intact. There are some tacky parts to Siem Reap, notably the loud and gaudy Pub Street, but for the rest it retains some integrity with a balance of fine cafes and classy guesthouses and hotels. The Siem Reap river winds its way through the town and if you follow it far enough at either end, provides easy release to the fringes of town  and the countryside beyond.
But the reason for being in Siem Reap is of course the superb World Heritage listed sites of Angkor Wat. The name Angkor Wat is used to refer to both the mother temple of the region - which is Angkor Wat, and the region that contains a series of other temples for several kilometres around - like Angkor Thom and Ta Prohm. I visited 5 different temples, and they are all magnificent, but Angkor Wat itself stands alone as the highlight. About 1.5 kilometres in length it is believed to be the largest religious structure ever built. Its location in deep forest, the majesty of its design, and the endless detail of the thousands of bas-reliefs and countless carvings on walls and roofs takes your breath away, keeps you entertained, and in a constant state of wonder.
There were a lot of people there the day I visited, and I imagine that is the same every day of the year, and herein lies a potential problem. The temple itself is big enough to absorb the crowds, but not so other smaller temples. (The lovely Bayon was a nightmare.)  The Angkor Wat complex must be a vast earner of foreign currency - every foreigner pays $20 a day to enter the complex. And now Cambodia is largely at peace with itself and the word is out that it is a superb place to visit, the world will continue to visit in droves and this is going to place a lot of pressure on the infrastructure around Siem Reap, and create growing congestion around the smaller temples.
I am not going to attempt to describe the temples in any detail here. Photos do a much better job of that. As in other places in Cambodia be prepared for constant requests to take a tuk-tuk or buy stuff you don't want. And if you say no try and be gracious about it.
When you're tired of the temples, and you still have the time, take a trip to the floating village of Chong Kneas about 15 kilometres away. It's one of those things you're never going to see in the average run of daily life, and it feels like a privilege to witness the intimate life of a community on water.