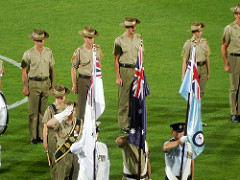 Ever since I taught Australian History to high school students I have felt uncomfortable using Anzac Day as a cause of celebration, let alone espousing it as some kind of event that forged our national identity.
From a historical perspective the verdict is pretty clear: the ANZAC campaign was a disaster. Australian and New Zealand soldiers were used as decoys and sent as lambs to the slaughter to distract the Turks from another region the British intended to attack. It was a disgrace that was best forgotten.
Yet we go on making it bigger and grander with each passing year. Richard Flanagan in his recent address to the National Press Club says that in his family Anzac Day was always about remembering those who went to war, and especially those who didn’t come home.  From around the mid-80s, in the hands of politicians – beginning with Bob Hawke – it has become something else. It’s become a patriotic rallying call to define who we are as a nation and the values and beliefs that go with it, and if you don’t subscribe to those beliefs you are somehow un-Australian. Well let me say right here and now that I am un-Australian. Which of course just means that I think differently to those who hold up the ‘Anzac spirit’ as some kind of mirror that all Australians must look into to find themselves.
I do a lot of walking around Australian towns and cities, and as I watch the churches become homes, cafes and bars, and the war memorials shine and proliferate, and see the vast sums of money being spent on more of them at Gallipoli, France, and here in Adelaide, it’s become clear to me that Australia’s real religion is war, or at least the memorialising if it. It feels like an unhealthy obsession.
What bothers me, and as Flanagan noted is really quite dangerous, is none of this is up for discussion with mainstream Australia. War, and the militarisation of national memory, is a no go area. Question its relevance or importance and you are immediately dismissed as un-Australian, left-leaning, hippy, radical or some other insult that consigns you to the margins. It’s a closed book, and sadly is in large part based on myth rather than fact.

We are going down a dead end street that offers no solace for the growing number of Australians who are unhappy – who smash up churches and graves, eat themselves to obesity, or express their life’s emptiness through road rage…. 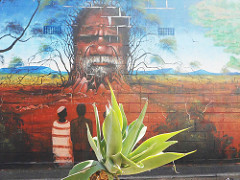 Flanagan wonders whether there may be another path Australia could take to seek the roots of its national identity. We have been given the priceless gift of sharing this remarkable continent with the oldest unbroken culture on the planet. This could be our legacy to the world. Why isn’t there a national museum dedicated to our indigenous culture? Why would we rather spend $100 million on a war museum in France honouring the lives of those who died fighting for another country’s wars rather than spend that money on a national monument honouring Australia’s vast pre-history? Why aren’t we standing on the hilltops boasting about the fact that we host an ancient civilization whose ancestors are still with us? And this story happened on this land – not in Turkey or France or Vietnam. These are the real, authentic stories of our ancient land: our true past. Who knows - it might even make us feel more connected to it, and perhaps lead us to appreciate the unique place in history that our co-existence with the earth’s oldest culture affords us.