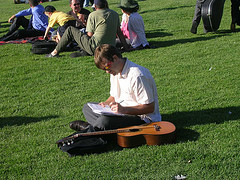 Given the bleak outlook for the VET sector in Victoria - for the TAFE sector anyway - it was encouraging that ConVerge went ahead this year, and was well attended with about 300 delegates participating.

On the flight home I was reading about blogging in Howard Rheingold's NetSmart . Rheingold says that when people criticise bloggers for writing about things they might consider trivial they are missing the point. The point is that whenever people commit thoughts to writing it is a valuable exercise in clarifying your thinking and disciplining the mind. Writing is of itself, ipso facto, a good thing to do. And so my thoughts on the sessions I attended at ConVerge12.

The opening keynote was from Tim Longhurst, 'futurist', and CEO of consultancy firm, Key  Message An engaging and entertaining speaker he based his talk around three themes:

Personally it provided a great segue for my own presentation on Global Trends affecting education later in the morning.

He quoted Chris Anderson ( from Wired) saying that the world is getting better in many ways, but then showed a rather trite example of Lil Demon, the break dancer. As good a break dancer as this kid may be it's a stretch to think this has improved the world! Perhaps the point was better made by citing examples of people who have never met f2f collaborating with others across geographical and temporal boundaries - this is  significant progress.

An exercise followed where it was revealed that 80% of the ConVerge audience have used their smart phone for banking - apparently a good indicator of the extent of 'digital-ness' of people. (I haven't!)

Best bits of the future

1 We will all become cyborgs

He cited the example of people who took the Turing test,  and who were unable to tell if they were talking to a person or  robot. In some cases they were wrong. When they thought they were talking with a robot it was a person and vice versa. So machine intelligence is improving.

Jamie Oliver gives his recipes away to generate a million dollar business. Copyright is a product of a time of scarcity of resources. This philosophy of abundance ties in nicely with the work of Martin Weller who includes a chapter title The Pedagogy of Abundance in his book, the Digital Scholar.

An informative session (such a lame word!) detailing the results of a project using Big Blue Button -  the tool that many hope will become the Open Source alternative to proprietary virtual classroom products like Adobe and Blackboard Collaborate.

Alas, while some were  impressed with the audio quality of this tool it is still a long way short of being a viable alternative to the major players.

As an aside Tim told us that he didn't think Blackboard were supporting Moodle integration any longer.

The obligatory session on MOODLE 2.3 by the inimitable Julian Ridden revealed:

Gilly Salmon was the keynote speaker late on day 1 but apparently did not have the version of the  presentation she wanted to deliver. Slides were too small to see easily.

While there was an element of the speakers clearly believing their own publicity, Box Hill TAFE are a good example of an organisation that has gone for the long term view of implementing systemic change from the top down. That is, management is behind the change, and a whole of institute approach is employed.

They have done extensive profiling of their student body:

·         have implemented Echo 360 and apparently are struggling to keep up with demand
·         they have developed a script that allows them to track amount of blended, interactive nature of Moodle sites. This data is fed to managers - they call them traffic light reports. These results are published throughout the organisation and encourage section managers to come forward and ask how they can improve their section's standing - wonderful!

ePortfolios (Mahara) are used in conjunction with a Personal Learning Plan unit for students
·         some students like to use epfs collaboratively
·         Blockers: staff and student skills/system usability - limited customisation options

·        Box Hill distinguishes between learnER and learnING analytics; learning analytics is more about whole of organisation 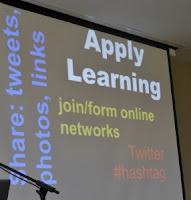 I would contend that the abundance of content and connections is as fundamental shift in education as any we are likely to encounter, and there has, to date, been little attempt to really place this at the centre of a model of teaching.
Martin Weller - The Digital Scholar: How Technology Is Transforming Scholarly Practice

An event called Designing Learning in the Digital Age took place here in Adelaide a week or so ago. After the initial keynote (which was generally very well received) there were a number of break-out sessions that, according to the majority of the feedback, failed badly.


SAMPLES of FEEDBACK FROM EVALUATION


The first of these comments is the most damning:


Will certainly not attend any future events where these presenters are involved.


I was one of the presenters involved. In 30 plus years of working as an educator in schools, adult education, professional development, and as an invited or keynote speaker at conferences feedback on my efforts has been largely positive, so to get such a bad wrap for the first time in my professional life hurts. And so I must look at why it happened.


In 2006 I had the great privilege of participating in the inaugural Future of Learning in a Networked World Unconference in NZ. This was the first time I experienced first hand how a group of connected educators could generate vast amounts of significant content in a relatively short time. And I had hoped that participants in this recent event would be able to replicate something like that NZ experience.

Extracting some key words from the above list we get:

I think it’s clear from the above description that participants would be doing things.  The intent was that those who attended this event would come ready to share, learn, collaborate, create and curate content. That is, it would not be an event where facilitators would be instructing, but rather an event where emphasis was squarely on the participants, and the knowledge and expertise they brought to the event would make or break the day.

But that it is not what happened. It is clear from the feedback that some came expecting to be taught and talked at. I had no intention of putting myself in that role for such an event. It would be ludicrous to even try. All my co-facilitator and I wanted to do was provide a time and place for connected educators to extend their personal learning networks, and tap into the collective intelligence of those who attended. To practice what is sometimes touted as a methodology for the digital age - paragogy.  The notion of ‘paragogy’ relates to the peer production of learning

I wanted to provide a platform for participants to talk and learn from each other. I assumed that people would quickly self-organise into groups of mutual interest, decide what they were going to do,  and do it. We would collect the resulting resources at the end of the sessions. It was also hoped that participants would be happy to complete tasks in the days after the event and share everything via a public Google Doc created for the event.

I have been part of such events before and that is what happened. It did not happen at this event. Why not?

1. the promotional materials and session descriptions obviously did not make what we trying to do explicit enough.

As I think back to previous events where this approach has been successful I realise that the term unconference had been used to describe the methodology employed. My mistake here was not to describe at least the events I was hosting as akin to unconference sessions. People came to learn from me as the facilitator; I was there to host a situation where people could learn from each other. Cross purposes.

2. people needed more time to get to know each other and explore what areas of mutual interest they might work on.  I badly misjudged this, and more time should have been allocated to allow this to happen.

3. the technology at the venue failed. While this was really disappointing, many had access to their own network connection anyway. Several participants also had fairly basic levels of ICT literacy and were unable to use their devices to quickly produce content.

While I don't think the failure of the venue's technology was the crucial factor in determining the ultimate success or otherwise of the day, it certainly didn't help, and I imagine this would have got several people offside. For the record I feel cheated by the venue. In the lead-up discussions with Rydges Southpark I was very specific about the nature of the event and said that 60 people would be making intensive use of their in-house wireless and they assured me several times that their Internet could cope with such use. They were wrong, and they should never have accepted our booking for this event. And I should not have believed them. A hard lesson learned.

4. There was not enough space for people to work comfortably in groups. I had envisaged people working alone, in pairs or groups as desired. We have to accept responsibility for this - we misjudged the amount of space needed for people to interact in the way we hoped they would.

So - really quite  ironic. We wanted to host an event where people could talk, share, create, and learn from each other to model how designing learning in the digital age needs to take these approaches into account, and we got feedback based on an expectation that we would be running teacher-led sessions that we had no intention of running.

We tried something new. We took a risk. We were trying to place “the abundance of content and connections ...at the centre of a model of teaching.” We failed. Innovation theory is quite clear that taking risks and failing is a necessary prerequsite for eventual success so I guess on that score we can salvage some hard learned lessons from the event, but ultimately we failed, and I have to accept responsibility for that. I'm really sorry that so many were disappointed. And you're only as good as your last gig...