I’ve always written. From the age of 7 I kept a daily diary. Admittedly my first entries at that age were fairly scant on detail. Whole days could be summed up thus: “Got up. Went to school. Played football when I got home. Went to bed.” Marvellous economy with words 😊
Fast forward 25 years to life on the inside - a Dutch winter on the third floor circa 1986. I was struggling with feeling captive – I had to live in a Dutch winter to realise how much of an outdoors person I was. In desperation I took to writing my life story to pass the time. And I think I did a reasonable job of writing about my life from birth till the time I left school.
Browsing through long forgotten corners as one does in this time of COVID I came across a copy of it. What struck me was how much detail it contained that I have completely forgotten. So here’s a tip – don’t leave writing about your life till too late. You DO forget things as time passes. 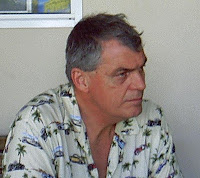 We moved back to Adelaide and went to live in a house that none of us liked very much. It’s only real asset was its proximity to the school Shaun and I would go to, and Celine’s college. The house was a small insignificant affair where we were to live for just a few months. Leaving the country had been a hard decision for my parents to take, and was made even harder by Damien’s departure for life in a monastery at the ripe old of age of sixteen. He would be living in Sydney, some 900 miles away. Now Damien and I had had little to do with each other over the years, save for times when I hassled him enough for him to lose his temper with me. And yet the strangest thing happened on the day he left for his new life far away. He departed from Adelaide airport and I don’t remember saying goodbye to him. However I do remember very clearly this overwhelming feeling of sadness coming over me as I gazed out at the plane he was sitting in before it drew away from the terminal. I withdrew from the crowd of people who’d come to say goodbye, climbed up on a small wall and stood looking at the plane and cried silently and secretly to myself. Maybe I had just picked up the obviously heavy emotional vibes that were floating around (my mother was distraught), but it’s almost as if I knew that day that there was an exceptional bond between us that I’d only just discovered, and that I’d miss him very much. It was a turning point in my relationship with my big brother; from that day on I felt closer to him than any other member of our family.

We would as a matter of course heap shit upon our parents for being too strict, or not letting us do what we wanted when and where we wanted. These parent slagging sessions were important for gaining respect within the group - it showed that you were a rebel. Teachers too of course were prime targets for this kind of shit slinging. Things came to a head at school one day when this thin pale looking character wearing a darker suit than normal joined our class in the middle of a Science lesson. He turned out to be a recently arrived English immigrant who was as it happened a little more advanced than the rest of us along the road to rebellion. He was right into pop music, played guitar and wrote his own songs and poetry, and was willing to speak his mind in class. He made a great impression on all of us. His style of rebellion was bolder, more direct, and came with intelligence. It wasn't long before we all clamoured to be his friend and were proud to be seen to be his friend. The school’s response to this new figurehead was to try and isolate him from potential disciples. Any group that was hanging around him in the playground was split up by the teacher on yard duty. In fact the teachers seemed to have isolated a potential core of troublemakers that counted about 10 kids with the English lad, Michael D, at our head. We were not allowed to mingle in the school ground in groups of more than two or three and at least my parents were warned to discourage any close friendship with this new disturbing influence. It was silly really. We were already on our teenage rampage before he came along. All he did was give it focus.


Michael and I became close friends. Basically it was a friendship forged through hours of listening to and talking about pop music. We spent hours on  sunny afternoons in darkened rooms listening to Cream, The Animals, The Rolling Stones, Vanilla Fudge et al and extolling the virtues of these our new idols. I remember telling Michael one day on the bus to school that I had bought my first ever record: Love Is All Around by The Troggs. He was suitably impressed. He had seen The Troggs perform in England - or so he said. It was always a point of discussion just how true were the many wonderful stories he used to tell.