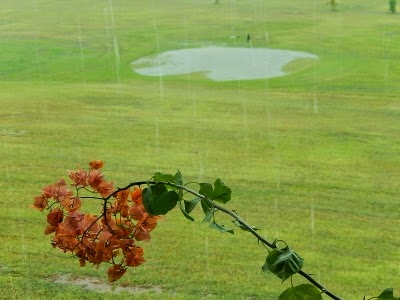 ... something which apparently happens on average 300 days a year. It's late afternoon and it's gloomy - almost dark. I'm nestled in the corner of the Air Cafe at a tiny airport. It seems despite the rain the planes will fly and I'll be in Nadi this evening.

Other passengers on this short flight are slowly filtering in so Nasouri airport almost feels busy. There's probably no more than 50 people here. Fiji changes the scale of things. The population of the whole country fits comfortably into Adelaide. It's never really crowded here. It's one of the few places I've visited where it would relatively easy to be alone. It's another of those 'they don't know how lucky they are' situations. It's an island paradise with a gentle climate, ridiculously lush vegetation (courtesy of the around 300 days of rain per year), where people shuffle around in sandals or thongs (or barefoot), wearing sulus and bright flowery clothing en route to somewhere in 'Fiji time.'

'Fiji time' takes some getting used to. It's great that people here are relaxed, but through another cultural lens it can seem rude. Why agree to meet at 4.00 when you have absolutely no intention of being ready at 4.00? It's probably going to be closer to 4.30. So why not just make it 4.30? Because it wouldn't happen till 5.00! So it goes...but it does give people the chance to relax about meeting deadlines, and an excuse to be lazy and inefficient. Your culture will decide :)

Despite the rain (in Suva); despite the low standard living for many - no electricity or running water - everyone seems to have a home and food to eat. Much like Sri Lanka. There's not much fat on the average budget, but people seem generally well and content. There is a percentage of drunken young men (the 18 - 25 year olds again) hanging out on Suva streets with nothing else to do but threaten violence but it doesn't feel too pernicious.

When I was last here about 18 years ago there was another noticeable tension which seems to have dissipated - that between indigenous Fijians and the Indian interlopers. Back then it was being constantly talked about and reported in the media. Such division seems to be a thing of the past for now - the two majority ethnic groups seem more intent on being Fijian rather than for example, Indo-Fijian. They're to be commended for that I say. I wonder if Afro-Americans might ever adopt this approach and just announce themselves as 'American'?

And today I learned about Rotuma. It's an island way off to the north about 500 kilometres away. Pasirio, who I've worked with the last few days, hails from there. He hasn't been there since 2009. It's apparently very hard to reach by air or sea. There's no other speck of land in any direction for 300 kms..And the people are Polynesian. That's all I know. I'm going to go hunting on Google for more information. I'm intrigued. Though he may not have not have been home to Rotuma for 5 years he has a calm about him. An island calm maybe, and an easy personal warmth.

And maybe that sums up Fiji - calm and warm. Though the fake bula smiles/greetings drive me nuts. Most of these greetings are genuine, but you get a few 'bulas' with a fake smile and no eye contact. Please Fiji folks - if you don't want to greet me and say hello that's absolutely fine by me. Ignore me. That's much nicer than a forced fake smile.
at May 27, 2014 3 comments: