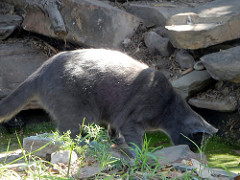 We’d seen a grey cat scurrying away down our driveway a few times when we came home. We figured it probably lived next door amidst the abundant piles of junk in the neighbours’ backyard. About a year ago these neighbours had to vacate the property as it was to be redeveloped.
The demolition began and we occasionally noticed a grey cat walking past our open back door. It, as expected, would scurry away at any indication we might come closer. This happened several times until one day the same cat ventured inside. We were sitting outside watching. It spent just a few seconds in the house and then scurried away once again.
This went on for a week or so until one night I was sitting in our living room near the back door and this ever braver grey cat walked right on in, surveyed the kitchen area for a minute or two and then strolled back outside. Again, this happened a few times before the next stage.
We had clearly passed her lengthy audition process and this dear cat one day strolls in with a kitten in its mouth. She deposited the kitten in a corner of our sitting room, and paced around nearby for a while. The kitten as it happened wasn’t too happy. It didn’t like where Mum had put her and meowed pretty much non-stop for about 20 minutes. Mother cat had seen enough. She picked up the kitten and took it back outside.
The following day she repeated this procedure with a different, larger kitten. This larger kitten was much happier about being left alone in the corner of our sitting room and barely said boo. After some time Mum went back outside and returned soon after with the smaller kitten from the day before and put it with its sibling. At this point of course we were wondering how many more there might be. I went outside and heard the meowing of another kitten on top of our back shed. I rescued it and put it in with the others. 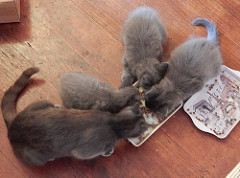 Se we now had 4 cats - the stray grey mother cat and 3 gorgeous kittens. So began an illuminating period of watching these creatures interact and grow. It was like watching a David Attenborough documentary in real time with front row seats.
I guess we always knew we would eventually get another cat but that time was far off in some undetermined future. We had the decision taken out of our hands. We had been adopted by this delightful skittish grey stray. So skittish in fact, we called her Skitty. Still very nervous of humans, especially any sudden movements, she would dart away impulsively and slink back to her kittens when no one was around. But Skitty would stay with us – she had chosen us after all. We ultimately gave 2 of her 3 kittens away, and decided to keep the smallest of them
I still hesitate some months later to start writing about her. Her story brought us so much joy and so much sadness in her short life. When we decided to keep the three kittens we erected a cardboard barrier across the entrance to an area of our sitting room to keep them contained. Almost as soon as that barrier stood it was this tiniest kitten that stood up against it, looked up and me and meowed. From the start she was the one who wanted to be picked up; she was the one that wanted human contact. It was love at first sight and it was an easy choice – if we were to keep one kitten to keep Skitty company, it would be this one.
She had several trial names. Her official Paws and Claws name was Jasper. River called her something else. For some reason I was reluctant to name her – perhaps I knew somewhere that she wouldn’t be with us for long. It was only on the final night of her life that I knew who she was. I named her Spirit – such was her desire to be alive and to do everything she could within her severe limitations.
Her life with us started out happily. She was much smaller than her 2 siblings but mixed it with them in the rough and tumble of cat play and games of chasey up and down the hallway and skidding around corners on the kitchen lino. She, like the other 2, was hilarious. When her siblings had gone, she and her mother played together and enjoyed roaming around the garden looking like Mum and Mini Me.  At some point we began to notice that she had occasional balance problems. She would wobble a little on her back legs and occasionally tumble over. This gradually got worse and more pronounced but she, undeterred, would pick herself up each time and continue on. She was happy.
But we saw that she was getting worse. It turned out she had a congenital disease of the central nervous system that was affecting her ability to walk and keep her balance. We kept her for as long as we could but at approximately 6 months old we had to put her down. (Those words hold no hint of the depth of emotion that we felt losing her. She was just a tiny little stray cat but we had fallen in love with her.)
Skitty spent much of the next few days wandering around the house looking for her little Spirit – it was so sad to see. It didn’t take long before we decided that we would try again. We would get another kitten to keep Skitty company. The experts will tell you cats are quite happy being solitary pets, but many will tell you too that if you have 2 cats they will likely spend a lot of time together.
We knew it was a gamble. There was no guarantee that Skitty would accept another kitten into her world, but we thought it worth the risk. Enter the 6 month old tabby we named Tully. It took 8 days for Skitty to start washing Tully and lying with her on the same couch or corner of a bed. That according to our local vet was something of a miracle. Typically it takes 6-8 weeks in such situations before the host cat will accept the newcomer.
We were hopeful, even confident, that Skitty would be OK with another kitten. She had been a loving and devoted mother to her own, and was very affectionate with us. We thought she had the right temperament to ‘adopt’ a new cat and we were right. 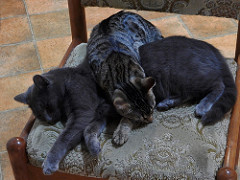 So now, several months on, we have two pretty much adult cats who get on famously, and are really good company for each other. In an ironic twist Tully is the acrobat par excellence that little Spirit should have been, and walks on tree tops and roofs and fence lines and keeps us in a constant state of anxiety whenever she’s outside. Two year old world weary Skitty causes no such anxiety. She has experienced life on her own out in the wilderness and is now quite happy with a domestic life indoors, or enjoying the garden from ground level!
If you had asked me a year ago if I was a cat or a dog person my answer would have been unreservedly ‘dog person’. As I write this Tully is lying asleep next to me just touching my left arm gently with her outstretched paws. It’s a deeply calming sensation. I’m now a cat person.