What is the Internet Doing to Our Brains?

Picked this up from Will Richardson’s blog. This article from Nicholas Carr needs to be read and contemplated by all Internet educators.

I know exactly what Nicholas Carr means. More and more I find myself engaged in what I call horizontal learning (skimming multiple resources, multitasking), and have to force myself to engage in vertical learning (prolonged focus on a single topic or resource.) There is indeed a change afoot.

Implications? Identify, make explicit, and teach both approaches. See slides 13- 16 of this presentation for more on horizontal v vertical learning.

On a related note I just came across this article today - Society Hard-wired for a fall. More on what computer use may be doing to our brains.
at June 15, 2008 4 comments: 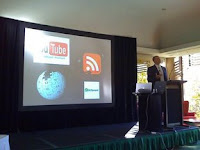 The Digital Education Revolution (DER) is an Australian Federal Government initiative worth $1.2 billion to advance ICT in Australian schools. Education au is currently sponsoring a series of symposia in Australian capital cities to get feedback from practitioners about what is being done, and what they want to see happen.

I was present for the first part of the symposium in today. Sheila Willaston outlined some of the key policy elements:

Targets of the program include

Mark Pesce was next on the podium. Some highlights of Mark’s presentation:

About four years ago YouTube, RSS, BitTorrent, and Wikipedia did not exist. In previous eras any one of these applications would have been considered seminal changes of the generation. These days an equally powerful application appears at least once a year. (eg Google Earth). This is the world generation Y have grown up in – where “the only constant is change.”

Referring to data gleaned from Mobile Phones in Japanese Life, he mentioned the notion of co-presence, where people use communication tools to connect and communicate constantly. Pesce argues that this practice is nothing new – only the tools are new. [David Attenborough refers to humankind as the ‘compulsive communicators.’]

The hidden curriculum of banning and blocking the use of these connection tools in schools is “denying kids the connectivity they experience in their daily lives.” There is an “invisible argument going on between school and life.” “The classroom has lost respect for their lives and (so) kids have lost respect for the classroom.”

I AM ONE OF THE PUSHERS

Pesce then confessed to being one of the pushers of a tool that mahy educators and parents just see as something that promotes cyber-bullying and MySpace suicide pacts. :)

Twitter is now being used for purposes way beyond what it was designed for. For example, the recent earthquake in was announced 30 minutes before the major news networks got hold of the story. “The street finds its own use for things” [A recent perspective I heard about ethics: “Ethics should not judge what is good or bad, but rather observe what people are doing.]

Mark did say that he thought he was probably preaching to the converted, and it did have that feeling, but his presentation was intended as a springboard for further discussion by symposium delegates for the rest of the day to come up with ideas for implementation as part of the DER . @theother66 twittered towards the end of the day that Gerry White was doing a great job of gathering all the ideas together in the final session. I look forward to seeing them.

Many thanks to education au for another great symposium.