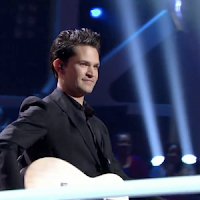 Johnny Cash is another music legend whose legacy is being kept alive by a generation who weren’t born when his songs were played on the radio. In A Boy Named Cash Monty Cotton does a fantastic job of bringing Cash’s music to a modern audience. He has the deep resonant vocal tone that was Cash’s trademark, and I suspect he may be a far more accomplished musician than Johnny Cash was.
This show is slick and pacey. Cotton rips through all the expected hits with a virtuosic ease. From Folsom Prison Blues to Ring of Fire and everything in between he plays everything Cash fans from the past might want to hear. And truth is he plays them all better than Johnny Cash ever did. With a deft touch on guitar and an array of loops and pedals he turns every song into a showcase of his exceptional ability and in the process elevates every song to a new high.
I doubt that Johnny Cash was funny on stage, but Cotton sure is. Goading the audience to participate at frequent intervals he gets everyone singing along and laughing at themselves in good natured fashion. Not only is this show great to listen to but, and perhaps in contrast to the serious persona Cash cultivated, there are plenty of laughs. A segment where he asks the audience to nominate songs for ‘a Cash conversion’ is very clever and really funny.
Cotton has taken the legend and the music and made it his own. His singing is great but if it lacks anything it’s that gravel edge that characterised Cash’s vocals – probably a consequence of hard living and a lot of drugs and alcohol – and Cotton might be better off without it!


A Boy Named Cash is almost the complete package. The hour flew by in the hands of a very talented musician/performer, and should guarantee that Cash’s music will last a good while longer yet.

(This review also published on The Clothesline.)
Posted by Michael at 11:48 PM