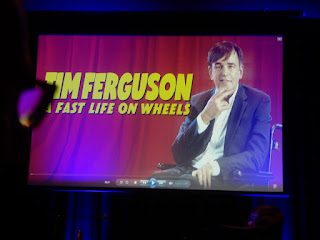 Tim Ferguson is fortunate enough to have had a glittering career, and much of it is on film, so this show is peppered with filmed highlights and funny stories of his rise and fall. The fall in Ferguson’s case is, of course, quite literal – it happened when he got out of bed one day and couldn’t stand up.
He begins with tales of his journalist father and his dedication to sedition when covering the Vietnam War, and places much of what he himself has done over the years in that same ‘tradition of sedition’. He’s a natural born story teller, and has lost none of his hard edge. That outrageous politically incorrect bravado from the days of the Doug Anthony Allstars (DAAS) is still there. Among tonight’s unfortunate targets were millennials – maybe it explains why there weren’t many in the audience – and the ABC.
His old mates from the Allstars, especially the now very hairy Paul McDermott also get to be the butt of many good jokes, but it’s important to reflect on just how big those guys were. They even had their own show on British television! Ferguson is older now and acknowledges that he too was once a stupid millennial, and he has the poetry to prove it!
Of course the MS elephant in the room has to be addressed at some stage so frank descriptions and incredibly candid footage lays it all bare for the world to see. Then we move on… just as Tim Ferguson has done. His personality, his track record, his network, and his talent will always ensure that he has satisfying options to distract him from his MS, and he capitalises on them to the max and leads a remarkably full life.
Thoroughly entertaining, irreverent as ever, funny, sad, intelligent – Tim Ferguson is still very much a star.