A Dark Comedy about Brahms 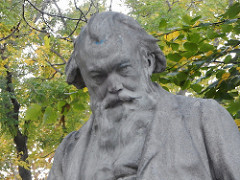 In Vienna’s City Park there is a grand statue of Brahms depicting the composer as a grumpy old man. This new work by Neil Salvage reinforces that view and goes some way to explain why he became so grumpy. In what could be seen as just another tortured artist scenario, albeit from the 19th Century, Brahms it seems was the only person in Vienna at the time who didn’t like his own music. Or so it appears at this party to celebrate the first performance of his new violin concerto.
Rather than play the gracious guest of honour Brahms spends much of his time drinking in a back room and berating all who commend him on his achievements. Cycles of praise and recrimination ensue between the composer, his publisher, violinist and musical collaborator, old friend Clara Schumann, and an influential critic. Bitter and resentful, Brahms seems intent on bringing everyone down with him to wallow in misery and self-doubt.
All these various roles are masterfully played by Salvage himself, Nicholas Collett – both eminent actors from the UK stage, and local emerging artist, Stefanie Rossi. Having excerpts of Brahms’ work played live added immediacy and context, but having the violinist overplay her silent reactions to the dialogue unfolding before her was a mistake. They need to be far more subtle.
Billed as a dark comedy, there’s not much room here for laughter. Ironic smiles perhaps as we watch Brahms himself try to reconcile being the author of the famous Lullaby with the angry person he’s become.


An entertaining play with solid acting performances, and a really good way to learn something about Brahms the person, and become (re)acquainted with his music.

(This review also published on The Clothesline.)
Posted by Michael at 10:14 PM