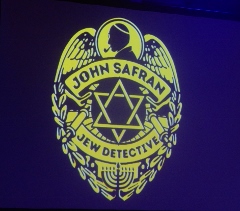 The Garden Of Unearthly Delights – The Factory, Wed 27 Feb.

John Safran’s Wikipedia entry describes him as radio personality, satirist, film maker and author. In Jew Detective: Sarcasm is Not a Crime he is attempting to add stand-up comedian to his list of pursuits. It’s certainly worth a shot. Many of the elements are there. Safran is a natural born trouble maker and his ability to draw satirical/sarcastic insight from the absurd situations he finds himself in should make for plenty of hilarity.
But this show may demand too much subtle thinking to be very funny. Safran pitches his show within a framework that pits the artist against the ideologue. Even assuming enough people understood the concept of ideologue, the audience found this show hard to fathom. Is he making fun of the far right? Is this Jew anti-Jew? Is he making fun of artists? Why does he mock so many people who defend causes? And of course all of these things are true. Safran treads a lonely, risky, grey area exposing the shortcomings of all the various -isms people march to defend.
He does this with sarcasm and satire, and runs the risk therefore of coming across as a smart arse. Safran says he just gets out of bed in the morning and finds himself mixed up in fights and disagreements. But this would be after taking a photo of a far right rally that he posts to Instagram with some provocative jibe and strangely enough someone at the rally challenges him! Which is exactly what he wants of course.
We’re shown lots of photographs from his past stunts, the occasional video, cuttings of amusing and threatening social media posts; there’s even a little live music. But it felt like he’s still learning the craft of the stand-up comedian. He read a lot from prepared notes, and at times it felt like he was reading one of his books out loud to us. But the certainty and conviction of his words in print or in the scripted narration of a documentary were not quite as sure in the live medium of stand up. But as Safran himself said, artists have to deal with loose ends and that he hasn’t quite mastered yet.

(This review also published on The Clothesline.)