Is Feminism Dead for Gen Y? 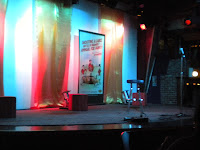 Note on the audio: I meant to say, "On the other hand, the theatre shows I have been to have been outstanding."

Best of the Fest Late Show
The Gov, Fri Feb 26

There was a misogynistic theme running through this show. Peter Berner rose above it. Daniel Townes told how he’d been accused of it. Carey Marx tried to obscure it with a sort of clever defence of using offensive language that was still in the end just offensive. Lindsay Webb’s opening line was “I can see your vagina” to a woman seated at the front - though he is skilled at building a funny set around audience interaction. It was the late show and much of the crowd were boozed, so any reference to sex or vaginas brought guaranteed laughs. There were funny moments, but Berner aside, this show would be a huge hit at local footy clubs - a sad indictment. Still, the crowd laughed uproariously all the way through.....
Posted by Michael at 11:52 PM

Hi Michael, I was lead here by your tweet but my iPhone refused to have anything to do with a flash based audio file . So whatever is was it will have to wait. I wonder if the iPhone will be the death of flash or the other way 'round?

Not sure who you were more disappointed with.. the audience or the performer. (perhaps both).

I feel much the same way regarding the print media. Magazines seem worse or perhaps is because I haven't been buying them for years.

But women are certainly portrayed as sexual objects.

A further thought crude comedians have been around for a good while e.g. Rodney Rude as an example. Perhaps it isn't generational but just some out there with different tastes??

BTW Interesting audio tools on your site reading your text as well as your audio via hipcast.

Viv - you may be right. But I have been reviewing comedy shows at the Fringe for about 5 years now and have never such heard such crass and crude material. Next year it's back to theatre and music reviews for me where you know people at least have some talent!