Around the World on 80 Quid 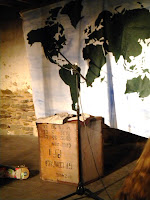 Aindrias, Around the World on 80 Quid
The Stables, Mon Mar 1

Irish Aindiras tells the tale of how he exploits his swarthy complexion while travelling the world from Ireland to Italy to cruise ship to Romania to Bangkok, imbibing vast quantities of alcohol and drugs as he goes. This frequently lands him in strife, and while his fiddle does sometimes get him out of trouble it’s amusing to hear how being pigeon-holed as an Irish fiddle player continually lands him in Irish pubs. His stories are neatly linked by music from the places he’s visited, and despite the fast paced delivery he has time to involve his audience in his adventures. Arriving in Australia finally affords him the opportunity of detoxing so he we all leave with the politically correct message!

FINAL WORD: Entertaining
Posted by Michael at 12:36 AM