Talking to the Other Side

It has been measured and noted recently that the impasse between left and right, liberal and conservative, Democrat and Republican in the Disunited States is greater and more bitter than ever before. Obama referred to this in his parting speech. Though not as extreme as the DS, there’s probably something similar occurring in Australia.
Since the shock of the Trump election there has been a realisation that democracy needs meaningful conversations to take place across this political divide. America, and democracies in general, need healing, and need to find a way to talk to each other across the chasm to aid this healing.


Robb Willer, psychologist, in his TED Talk about how to have better political conversations reveals that the political divide in the DS is underpinned by a moral divide. Each side of that divide has its own set of values. In broad brush they look like this: 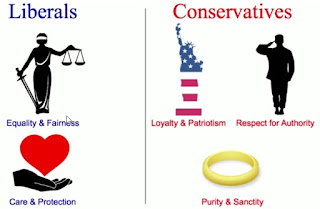 And in essence, as long as the values of each side remain steadfast and refuse to accommodate the point of view of the other, no one is ever going to change their mind. He argues that if a liberal thinker wants to change the mind on some issue of a conservative thinker then you have to do it by appealing to values that the conservative relates to – patriotism for example. Or respect for authority. And vice versa of course.
Now it turns out that someone else using a different set of data – a study comparing what parts of the brain are used predominantly by liberal and conservative thinkers – came to the same conclusion. That we need to use the language and perspective and values of the other side if our appeals to them to see an issue differently are to get any traction. What this study found is that liberals and conservatives use different parts of their brain to process information. Not exclusively, but they each have a tendency to use a part of the brain more than others.
Amygdala – seat of fear
Cortex – logic, rational argument, ideas,
For more on this go to my podcast on the topic.

Turns out there's quite a lot of commentary around this issue in the American context:

https://www.ted.com/talks/robb_willer_how_to_have_better_political_conversations#t-265472
Posted by Michael at 11:43 PM

Michael, thank you for this clear and cogent summary of what is now a vitally urgent matter for your society. I'd love to know if, informed with and inspired by this understanding, you have tried 'talking to the other side'. How did you converse differently? How did it go? Bravo, Delia.