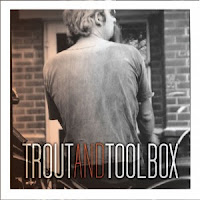 TROUT AND TOOLBOX
Ray Smith
Some musicians seem able to move happily between different musical worlds. I first became aware of Adelaide based musician, Ray Smith, when he was playing in loud, experimental rock bands like the Sympathy Orchestra. Sometime later I heard him accompanying himself on acoustic guitar and was immediately struck by the depth and resonance of his voice. Those deep and resonant vocals are front and centre on Trout and Toolbox.
Trout and Toolbox is a collection of folk songs with very strong connections back to Ray’s native Cumbria in the north of England. All but one of the tunes are original, and there are telling turns of melody that derive from the mournful, haunting sounds of traditional English folk music. And so too does much of the subject matter – mills closing down, life as a weaver, and a song of praise to northern landscapes. It’s almost as if Ray is unveiling his past while he tries to reconcile his origins with the person who chose to migrate to Australia, and in that sense it’s quite a personal collection of songs.
Trout and Toolbox is book-ended with an unnamed instrumental piece that features some rich and melodic acoustic guitar tones that aptly signal what’s to come, and neatly wraps up the package after the final song.
Billy is a tale of war beautifully arranged for guitar, flute and violin. A Sense of Place is an endearing tale of a couple who have spent most of their life together and learnt to appreciate that a sense of place can be as simple as ‘the smile on your face’. There’s some lovely lyrical images here – ‘he will wash and she’ll carefully dry the plates’; ‘he always checks his tie’s straight in the mirror in the hallway.’ A curious feature of this album is the fact that Ray Smith’s vocals still sound like he’s living in Cumbria, and it’s quite pronounced on this song. It’s often hard to tell where people come from once they start singing, but not so in Ray’s case. It adds a layer of authenticity that appropriately gives greater weight to the idea of place. There’s a sting in the tail here as the final verse addresses Australia’s Stolen Generation being robbed of their sense of place – ‘a national disgrace’.
Using the metaphor of migrating birds, Migration focuses on the tension between staying and leaving. Punchy guitar underpins a melodic air that feels quite ancient. A mini jig/reel on accordion mid-song and again at the end briefly lightens the mood, but the prevailing feeling is one of a difficult reconciliation between the state of migration and the desire to stay home.
The Weaver Is much very rooted in the context of industrial England. Another strong vocal features curious phrases like ’watch your shuttle”. The cornet part by Kerryn Schofield lends an anthemic feel and in what feels like an intentional romanticising of the passing craft of weaving, breaks into a last post type coda to conclude what is quite a lovely song.
The Mill continues with a similar theme. “There’s no need to hurry now; soon we’ll be leaving the town.” There’s no more work because the mill is closing. It reminds me of Eric Bogle’s lament about the disappearing Australian farmer, and the emotion etched into this story is exquisitely wrought on violin by Emma Woolcock. The warmth and resonance of her playing is just delicious.
Tallahassee takes us to the other side of the Atlantic searching for a past lover. Curiously the narrator learns that his old Tallahassee flame no longer lives there and had also migrated to a land far away. This song feels and sounds quite different to the other songs on this CD and is steered along by fiddle that sounds more American than English, with acoustic bass from Tamas Smith.
Planxty Isaac is an instrumental track with acoustic guitars dancing in a bright and chirpy tune in a style similar to that of Canadian guitar virtuoso, Leo Kottke. Guitars here cross the oceans with influences from both sides of the Atlantic.
In Now, written by Nic Jones, the migrant pleads the case for the present moment in an attempt perhaps to convince himself that he made the right choice to leave all those years ago. “The now is here; so simple and clear; the past is gone.” Cornet provides an anthemic backdrop again, and the tone of the guitar picking is warm and resonant.


And then, and it feels like the whole album has been leading up to this point, the migrant returns home. To see ‘that broad fen again, feel the wind blowing cold from the glen; to hear the curlew call and the ocean roar’ and where ‘he’ll be home again once more’. Cue Cumbrian pipes! Home Again is another haunting and captivating melody with tentacles stretching back to Cumbria. There is a plaintive sadness here.  Australia has been good for Ray Smith. But there’s clearly part of his soul that will always be in Cumbria. I hope he continues to bring that part of his musical soul back to our shores because it has a wistful depth and wisdom that reconciles past and present, and delivers perspectives in songs that are rich in melody, warm in feeling, and resonant with meaning.

(This review also on The Clothesline.)
Posted by Michael at 9:59 PM

Michael, thank you for this clear and cogent summary of what is now a vitally urgent matter for your society. I'd love to know if, informed with and inspired by this understanding, you have tried 'talking to the other side'. How did you converse differently? How did it go? Bravo, Delia.

I think you meant this comment to be attached to the previous post but.....no I haven't tried talking to the other side Delia. I would have to organise some kind of event or gathering for it to happen.....I wonder if there would be funding somewhere for this kind of initiative....