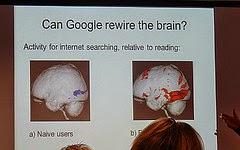 Baroness Susan Greenfield has been giving talks on the dangers associated with Internet technology for some years now. I have worked in the field of educational technology for the last 15 years and often read her reports on her research and subsequent disparaging grand conclusions about technology so I admit that I probably went to hear her recent address at the University of South Australia with a degree of bias. Nevertheless I wanted to hear her for myself and make up my own mind.

In broad sweep I actually agree with much of what she had to day. Like her, I am concerned about how mobile and Internet technologies may be rewiring our brains, and redefining us as a species. I get no joy, and a degree of angst, when I see a 20 something person buried in the screen of their phone and not once look up to see what might be happening outside the train window during a 45 minute journey through superb scenery.

My problem is how she reaches her conclusions. There was fleeting reference to articles and research whose titles contain words like 'brain', 'technology', 'growth', etc but zero discussion about these works. Instead, in the talk I attended, she was openly dismissive about whatever gains new technology may have brought us. Pandering to the prejudice of the crowd, she went for cheap shots: Twitter - "why would anyone want to know about what your cat is doing?" I have never seen that kind of trite message on my Twitter feed because my feed is cultivated. I carefully select who I follow. She would know that thousands use Twitter as an intelligent means of exchange but she chose to ignore that fact for the sake of her sensationalist and simplistic argument. Another chestnut - how could anyone think that social media connections could be as rich as face to face contact in the same room? Here she is being ignorant or devious, and I suspect it's the latter. I suspect she, like me and countless others, has enjoyed a degree of freedom as a result of being a disembodied entity on the Net. Very early in my days on the Net I became aware of a liberation I felt to express ideas when no one knew if I was young or old, academic or truck driver, physically disabled or deliciously attractive. I was a brain without all the clutter that physical presence brings and my ideas were judged as just that - ideas. Not a product of the casing they came in.

Yes Internet and mobile technology is changing us - no one disputes this. It does rewire our brains. But by the same token, as Greenfield would agree, the moment we decide for example to go off the Net and learn a new language or play a new instrument our brain changes again. Brain changes are not permanent. Our brain will happily accommodate whatever we choose to pursue - right though to old age.

Another writer who has bridged this same territory is Nicholas Carr in his book, The Shallows - What the Internet is Doing to our Brains. Carr also came in for plenty of flack from the technology community  for his provocative questioning of the value of technology, but at least Carr was not sensationalising his case, or demeaning those who lived by the Internet. All Carr was suggesting is that we need to debate this issue of what's happening to us as a result of our (near) addiction to the new technologies. No argument from me there, and I think really that is all Greenfield ultimately wants to see happen as well. But her pandering to ignorant prejudice is unhelpful and merely reinforces the opinions of those who don't understand the advantages of new technology.

To be fair though Greenfield in the main was talking about children. Baby Boomers like myself can delve deeply into the new world of technology, then stand back and compare the process with other previous means of processing and distributing knowledge - books, writing on paper, face to face discussions. We can evaluate the benefit of the new against the old. Children don't have this affordance. Very young children only know the world of screens and multiple distraction. And older children may not have known a time when reflection, time alone, thinking absent-mindedly, daydreaming, and reading silently for long periods were normal occurrences, and crucial determinants of our mental and emotional health.

I keep thinking that educators need to have these discussions with their students - children and adults -  as part of a digital literacy program. Have them compare reading print text with screen text and evaluate the difference. Have them multitask as they research a topic and then try reading one or two books or articles on the same topic and compare the two experiences. (I have referred to this elsewhere as horizontal versus vertical learning.) We are the first generation in human history that can actually observe the changes that are happening to us as we adopt new technology. Neuroscience has advanced to the point that we can almost measure these changes in real time. So rather than sound the clarion calls of alarm as Susan Greenfield likes to do, let's collectively engage in an exploration of how we're changing, and be aware and mindful about it.


Greenfield's style earned her a near thunderous ovation from the non-believers, but she was preaching to the choir. And it isn't very helpful in encouraging dialogue between opposing factions of this new technology dilemma. She seems more interested in polarising opinion and selling books. If you want to read a book asking intelligent questions about how technology may be changing us, read Nicholas Carr's The Shallows instead.
Posted by Michael at 10:38 PM

Morganise-IT said...
This comment has been removed by the author.
6:00 PM

Michael, I'm sad to hear Susan Greenfield was so superficial. In the past, I've liked some of her writings. I agree: with technologies and methodologies, it's not either/or but and/and.

Greenfield is allegedly measuring the physical affects of digital media on the brain through the lens of neuroscience.

Disclaimer: I have no expertise in this area. I read extensively about legal and social affects of social media, I do not claim expertise in these areas.

My understanding is that different age groups use digital (media, tools, spaces) differently. Is Greenfield saying 'how ever you use digital, the affects are the same?'. Where did she draw the sample population from? How diverse was the sample? What was the age range of her sample? Were there notable differences between different age groups, cultures, activities and levels of involvement? I was left with many questions. Greenfields message seemed to be, 'Oh woe is the youth of today!'.

I do not feel Greenfield made distinctions between different types of contexts in which people use digital.

For every cat video on youtube, there's a tutorial teaching you 'how to' or offering a 'Tutorial'.
Greenfield seems to imply the use of digital media inhibits deep social connections, yet I read recently that the number of face-to-face and community gatherings has increased over recent years, possibly because people can more easily connect with others with shared interests.

When talking about gamers/games, Greenfield made no distinction between types of games. Does 'Call of Duty' affect you in the same way as 'Portal'? I do believe games in virtual and physical environments can impact behaviours and change accepted norms. My assumption is that factors including the game; the player and the beliefs/ethics they bring to the game would influence how behaviours/norms are affected. Digital games are as diverse as those available in the physical space. Greenfield might be surprised to discover that ethics are debated by players of games eg. http://bit.ly/WoWEthicsSrch (I'm not a player but I have witnessed robust debates).

Where she talks about changes in brains - she doesn't offer any argument as to whether these changes are permanent or temporary. When she mentions some things being 'similar/like' Autism she does not make it clear whether a multitude of behaviours and interactions were affected - or just the way her sample audience visually identified things.
She made a big deal about identity becoming diluted - however, people often use digital mediums to explore identity in healthy ways.

I found some parts of her talk referenced actual research but conclusions seemed to rely on the audience to fill in a lot of gaps and jump to conclusions rather than being established through clear argument. I felt there was a lack of structured argument and found this frustrating. As a result, I went away feeling Greenfield lacked credibility and felt her talk was and opinion piece rather than science.