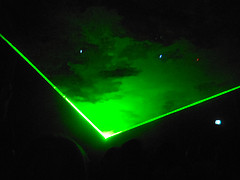 It began without introduction or fanfare. Two shadowy figures huddled over keyboards, mixers and other assorted gadgetry launched an electronic fanfare of their own that enveloped every square centimetre of the Queens Theatre. It was quite literally an assault on the senses: volume was something you felt not just heard. Often quite beautiful ethereal sounds were disturbed by sonic rumblings that seemed to come from deep within the earth to shake the building and vibrate your organs. A sound and light show followed that just took the concept to a new level. Sound driven beams, waves, arcs, and swirls radiated above and around us in a science fiction fantasy. Except of course it is not sci-fi - it is now. Much excitement lays ahead for those who dabble in the digital arts. *Unsound Adelaide part 1 was a stunning, if a little scary, entree into a field that could blow peoples' minds.
Posted by Michael at 12:11 AM