The Saints of British Rock 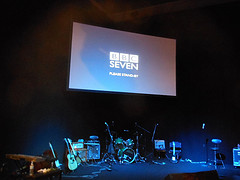 The Saints of British Rock tells the tale of a mythical rock band that rise to stardom during the sixties. Using the format of a celebrity chat show, supplemented by slides, movies and animation, they relate stories of their success before disappearing into a time warp that is connected with Camelot and King Arthur. Somehow they are converted into eco-rock warriors and re-emerge as musical campaigners for the natural environment. So far so good. The dialogue from the two main characters however just seems childish and pointless. The intent presumably is to satirise the phenomenon of vacuous rock stars being thrust into the limelight and forced to be spokespersons about things they know little about, but the writing is tedious and lacks punch. Musically the show holds together and has some nice moments. It would work better if they just told the story with music and multimedia and drastically prune the dialogue.
Posted by Michael at 4:48 PM