What Can Education Learn from 20 20 Cricket? 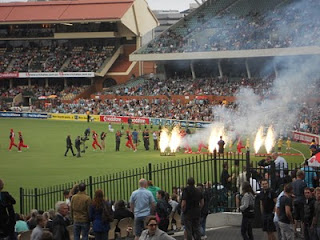 I loathe spectator sports. I missed out on the brainwashing as a kid - so I never understood the value of watching grown men chasing a ball. I always thought the true value in sport was participation.

so what you are asking is : - Does something only have value if it has been electronically processed and delivered as entertainment, bastardized by corportate sponsorship. - Had any deep values like sportsmanship, playing for the love of the game and enjoying the simple things like the smell of cut grass, the sound of leather upon willow ( bear with me while I wax lyrical ) ripped from its core.?

[ha ha i beleive this is called a strawman argument]

well... yeah .... havent we already done that to education? a textbook is no longer good enough - we've got to have flash simulations and eye candy. - we lurch from one fad to the next. podcasting - youtube - RSS - ipad - somehow forgetting that the lectures that we remember years after we've experienced them were performances done by a skilled orator.

What would you rather watch ? - a dinky flash demonstration or a TED video?

Perhaps I am too harsh - 20/20 cricket didnt happen over night - it evolved from Packers world series cricket.

Online education is still young compared to cricket. perhaps it needs more time to evolve before we can see the mature finished product.

one thing though - the concept of education involving a classroom, a teacher, and a test at the end is deeply entrenched. even more so than the Australian tradition of following the cricket.


actually having re-read the brain dump above it occured to me that cricket now has many forms - test cricket, the ashes, - one day cricket, 20/20 , club cricket, school cricket... it's all cricket.

and education is as varied ( perhaps more so ) and yes - there is room for the 20/20 version of education.

and a lot of the time instead of going to the 20/20 high tech training session , I would prefer a textbook and the time to read it. - (that must be the equivalent of watching a test series.... :)

Love these comments Peter - and agree with most of them. They're really a blog post of their own! But I guess it's about balance - as it usually is - sometimes the high tech/edutainment 2020 approach, and sometimes a solid 5 day Test Match with a text book. There's value in both. And we need to teach that.