Lake Mungo and the Meaning of Home 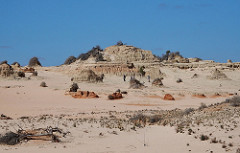 In 1974 the remains of Mungo Man were found on the shores of the former Lake Mungo in western New South Wales. His bones were transported to places far away for the purposes of science. It was these bones that proved conclusively that humans had lived in Australia for at least 50,000 years.
After four decades, and after much lobbying from Aboriginal people from the Lake Mungo region, Mungo man was returned to his resting place by the lake in 2017.  An elderly Aboriginal woman commented:

When I heard these words it was as if I was appreciating the wisdom of the ancient hosts of our land in a way I never had before. Tears flowed as the profound message in those simple words echoed deep down in my soul. We all need to go home. And the elderly woman was talking about a man 50,000 years old as if she knew him. She cared about Mungo Man’s soul. No matter how long ago he lived. She and other members of her community have a responsibility to take care of their ancestors and their land. And a man or woman and their land should not be separated.
I went to Lake Mungo recently – an extraordinary place. The public can’t visit the final resting place of Mungo Man, but you can visit the extraordinary wall of sand dunes that run along the edge of where Lake Mungo once glistened in the sun. The Visitors Centre refers to local Aboriginal groups having cared for the land around Lake Mungo for 50,000 years. Note, not lived in, but cared for the land. Their very existence in the land of their ancestors assumes they are its custodians. Another simple, powerful message.
There is something deeply primal about the notion of home. It strikes at the very core of what it means to be alive, to be human. It evokes feelings of warmth, safety, and contentment. Home is a place where you feel comfortable and know intrinsically how to behave. No pretence is needed because at home you are your natural self, and for many it is a place they return to again and again – in both the literal and metaphorical sense – for sustenance.
For some others this may be precisely why they leave home for they crave something other than safety and comfort. Or their experience of home was so dreadful that they leave never to return. Oscar Wilde wrote that ‘no man is an adult until they leave home.’  In many cultures it is a mark of respect earned if you have left your homeland and lived much of your life in foreign shores. It conveys a certain worldliness somehow, a strength that you have struck out on your own and succeeded without the support of your family, relatives or culture – the immigrant. And though an immigrant at the end of their life might long to return to their homeland or have their ashes scattered in the fields or rivers of home it rarely happens. In the modern world a great many people leave their home never to return.
So what of their souls? Is the soul of one born in Wales and buried in Australia doomed to wander for eternity? If the Mungo elder is correct then that would be the case, and we all therefore suffer. Could there be a different set of rules than those that govern the belief systems of Aboriginal Australians? Is that the case for those who choose to leave their place of birth, and are happy to remain away, and who come to some spiritual reconciliation with a different place of their own choosing; a place they came to as a foreigner but came to regard as their home; their spiritual home? Can you in effect choose where your soul calls home?
The Aboriginal belief that one should be buried in the land of your birth works for a culture and time where most people would not have strayed far from their ancestral home. Though there may be some deep primal appeal attached to this notion, it can’t be a matter of absolute fact. It is culture and context specific.
It is interesting though to contemplate what home means for each one of us. Is it a house? A suburb or town? A land or country? Or is it being with a certain person, or being in a certain state of mind? Does listening to a particular piece of music make you feel at home? The possibilities are many. Is the state of feeling at home literal and physical or more metaphorical and symbolic where in fact the physical location has no bearing at all on the notion of feeling at home?
For my own part it has been all of these things at different times.  In terms of physical location I can variously claim to feel at home in a particular suburb where I have lived much of my life, or more widely the whole city of Adelaide, or more widely still the land of Australia. I do honestly feel at home in locations where I have previously lived or visited frequently – Holland, or Cambodia. And mysteriously, or perhaps even mystically, some places seem to take hold of your soul for no obvious reason. Israel worked like this for me. I felt a strange and strong affinity with Israel from the moment I arrived there. And there are other times when it is only in the company of my partner that I feel truly at home.
So is home where the heart is? It turns out the heart can be at home at any number of places, but perhaps not simultaneously. Perhaps home is simply where you are at any given moment that you’re feeling good about yourself and your place in the world.
To return to Mungo Man, or any other deceased being that has been interred, it seems obvious that they should just be left in peace, and it seems quite feasible that a disturbed body may trigger the wandering of a consequently restless soul.