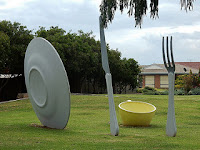 Many of us have seen episodes of Fawlty Towers multiple times. We know and love the characters. We know the lines. We know the madcap plot twists. Hence the excited sense of anticipation about how it might translate to the live stage. John Cleese has taken 3 of his favourite episodes and cleverly reworked them into a two act stage play.

And it works. Wonderful comedic writing, zany story lines, quirky characters, and liberal dashes of good old-fashioned slapstick guarantee that much. And a well-seasoned cast deliver mostly storng performances in a fun evening of timeless frivolity.

It was impossible not to compare with the original – Aimee Horne as Polly was perfect, as was Paul Bertram as the eccentric and forgetful Major. They could have walked on to the original set of Fawlty Towers without anyone noticing. Deborah Kennedy was superb as the deaf and potty Mrs Richards, Blazey Best did a great job of reminding us just how much of a tasteless tart Sybil is, and Syd Brisbane channelled Manuel beautifully.

Then of course there was Stephen Hall’s daunting task of taking on the role of Basil Fawlty. He deserves spades of accolades for simply daring to take on what would have to be one of the more impossible acts to follow in the history of show business, and he largely succeeded, especially in the secoind act where he seemed more comfortable in the skin of the more manic Basil. One could quibble about aspects of his performance but his ability to realise a believable character is central to the whole show working and he definitely achieves that. If we had never seen John Cleese in this role it would be hailed unreservedly as a great performance. He is not John Cleese. And Cleese’s Basil Fawlty has already gone down in history as one of the great comic characters of the 20th century.

Those who were expecting something more original than a carbon copy of the original characters, plots and dialogue may be disappointed. And sticking so close to the orginal begs for comparisons to be made. As one astute observer commented, it was like going to see a cover band play all of your favourite songs. You know they’re good – not as good as the original versions - but you go along anyway to remind yourself how much you love and enjoy all those songs. And so it was with this production of Fawlty Towers.


The fantastic set was very true to the original with an added vertical dimension with both floors of the hotel visible simultaneously. The famous lines were all there (“Would you like me to move the hotel a little to the left dear?” “Don’t mind him he’s from Barcelona.”) and it flew by in a flash. Lots of chuckling, permanent nostalgic grins, but not much uproarious laughter. More like a comfortable night out with an old friend that you love dearly.

(also published on The Clothesline)
Posted by Michael at 10:44 PM