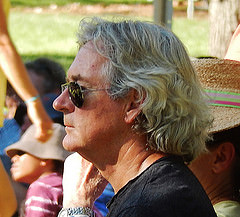 OK. I’m going to write this rather than talk it. In truth, I wasn’t a big fan of Stairway to Heaven. In fact the song drove me nuts. As a guitarist and busker I was asked hundreds of times if I knew how to play it but I never learned it. But the version of this song in this concert is a stunner. Nor was I a great fan of Led Zeppelin after their early years. Like many bands their best came early on and they never quite reproduced the edge of their early stuff. So the reference to Led Zeppelin being the ‘wind beneath the wings of a generation’ was really using them as a metaphor for all the music that served that function. It could have been The Who, Stones, Beatles, Animals, Hendrix, etc – it was the collective impact of new rock that sustained the cultural change.
What of that change? Yes there were early utopian claims that the Age of Aquarius would herald the age of peace and equality, but it clearly didn’t happen. So what did change? It definitely drove a wedge between mine and my parents’ generation. By the time I was 20 I was living a life that was eons apart from theirs. The outward expression of this gulf was our appearance. We let our hair grow, wore daggy or weird clothes, stopped going to church and moved in to shared houses. Youth embraced a new freedom that was missing in previous decades, and the stifling tyranny of the family unit was broken. And rock music was our music, our mouthpiece. It’s not just the music that did it – it was a mix of many things – but the music was the outward expression of liberty that youth had discovered.
The legacy of this time can still be seen in a myriad of things:
·         It is now for example quite OK to go to a fancy theatre in jeans and a t-shirt. Or the CBD. Or anywhere. This breaking down of a strict uniformity of dress code for all began in the late 60s.
·         It began a globalisation of the world. People like Dylan helped people realise that struggles were the same the world over.
·         Young people started to travel – roaming far away countries for months on end.
·         People began to live together out of wedlock en masse and eventually wore down the importance of the institution of marriage.
·         Mainstream religion suffered a massive downturn in appeal. People began to look elsewhere – Buddhism, meditation, Eastern religions generally – for spiritual sustenance.
·         Communities based on very different values like Nimbin and others on the northern coast of NSW began to spring up all over the world. Many dropped out of a mainstream society that no longer met their needs.
·         Many more people began to take drugs and had their consciousness altered. There were plenty of casualties but no one who takes mind altering drugs can ever look at the world the same way again.
·         It did liberate women to some extent. Divorce became socially acceptable and single parents received social security to enable them to live a life free of abusive partners.
None of these things are final. They are processes of cultural change that are still evolving. It’s interesting to think about whether the Boomers created these changes, or whether they happened to them. It’s probably both. Things were changing rapidly, and they were the agents of change.
The fact is that between 1965 and 1975 the Western world changed dramatically. And behind it was this music, these anthems advertising and extolling another life and other values. The music you listen to in your teens and twenties is typically the music that stays with you forever. It is the music that was playing when you were becoming adult and working out who you were and what you believed, and it is woven into your DNA. It provokes deep emotion whenever you hear it. So I understand too well what Robert Plant was feeling as he listened to his song in that concert. Quite frequently, without warning, I’ll be listening to music of that time and tears will come. Tears for the memories, the intense emotions of love and love lost and youth and freedom and good times, for the people who have gone or who got lost along the way. And because these people who inspired us with their anthems of an incredibly exciting time are dying. Every time I see a musician from that time I am acutely aware that it is probably the last time I’ll see them.

We’re still left with a world of wonder and turmoil.


Perhaps the part of the legacy of the 60s and 70s I value above all else is the fact that I am friends with my adult children in a way that was impossible when I was 20. The world had changed too much and too fast for me and my parents to be anything but polite strangers. They simply had no clue who their children were anymore. So I, and many of my generation (Leigh’s going to tell me something different!) made sure as parents that we would never be strangers to our children; that we would never impose on them values that were not theirs. I am friends with my children, and the generation/cultural gap is small. But that is my life….. J
Posted by Michael at 12:07 AM

Michael, I really liked this analysis. I look forward to discussing it at length some time.


everytime i walked into a music store in the 80's there was always some bozo trying out a guitar by playing stairway to heaven - it became a cliche.

Of course me being a bit gen X er than boomer Andrew Denton's - Money or the Gun's treatment of Stairway to Heaven speaks more to me than the original.

I had a friend that had the LP of Led Zep IV and so a few moments after the last notes of Stairway to Heaven I half expect the next song on the album to crank out ( sorta like you cant just play Evie part 1 - but they do . oh the next song ? - https://youtu.be/7joxOe76vCE