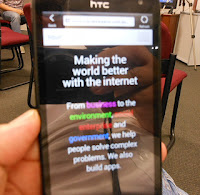 Went to an Adelaide Netsquared event recently to listen to speakers in four separate locations in a Google Hangout hookup between Adelaide, Melbourne, Auckland and Wellington. Tom Hawkins intro'd the session and made reference to co-working spaces.

Will from Melbourne was the next speaker talking about the Global Poverty Project. Aiming to "gangify resistance to global poverty." Referred to an app now available from Global Citizen.

John in Wellington followed talking about Loomio (an open source tool for collaborative decision making), and Enspiral - a platform to increase the numbers of people working on 'big problems'.

Another Will from Melbourne spoke about Squareweave and the quest to redirect more money to charity. He predicted that the next fast growing industry on the Net will be harnessing big data. Quote: "anonymous giving to charity doesn't fly with the young generation!" They want us and their friends to know about it!

Evan in Adelaide then spoke about Our World Today, an alternative media outlet that focuses on positive stories. (In contrast to mainstream media which has conflict as a core value.)

Just inspiring to sit and listen to a bunch of people using the web for good And all of them were under 35.
Posted by Michael at 11:31 PM