Living in a Trumped World 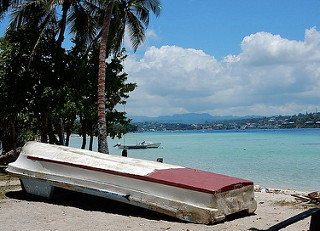 I was in Vanuatu working with vocational educators when Trump was elected and Cohen died and I was desperate to talk to someone about it. I broached the topics with the people I was with. Their response? Is there an election happening? Who is Donald Trump? What’s wrong with him? And they’d never heard of Leonard Cohen. So there’s another kind of naivete that exists in many parts of the developing world. Their world is far from perfect but they are not tormented by the horrendous and sad stories that our 24/7 media world feeds the globally connected citizen. Trump and Cohen are irrelevant to them. They go about peaceful lives doing what they can to make a living and feed their families and don’t seem any less happy for it. They certainly don’t have the material means to travel but their disconnected cocoon of a tropical paradise seems to deliver a kind of peace and resignation that is far from the angst that my newly discovered naivete wreaks upon my being. Perhaps I’d have been better off being born in Vanuatu.