A Dramatic Look at China-Australia Relations 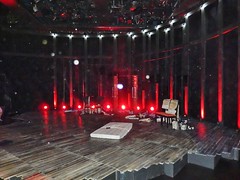 In the space of my lifetime China has changed from a being pariah state to one that Australia relies on heavily for its economic well-being. The recent death of Gough Whitlam reminded us all that the change began in the seventies when he had the wisdom to open relations with China. China itself has changed a great deal and Beijing has become a modern metropolis. Outwardly it has become much like any other modern city. But as Kryptonite reveals, what goes on behind the scenes or under the surface of the apparent changes in China can still leave the rest of the world mystified about what really drives this vast nation.

Lian, played by Ursula Mills, was one of the very first Chinese students to grace our shores in the 1980s. She meets Dylan (Tim Walter), a fellow student on campus and they are immediately intrigued by each other. What follows is a series of meetings over the years as their lives change radically and they attempt to reconcile the feelings they have for each other. These meetings are set against a backdrop of changing relations between China and Australia.

The infamous events of Tiananmen Square are a watershed for their own relationship and that of their respective countries, and is the first in a series of hiccups that both draws them together and pushes them apart. This tension is central to the play. No matter how much they are attracted to each other cultural differences always manage to render an ongoing relationship difficult.

The scenes early in the play where the young students make fun of each other as they explore their different backgrounds are quite endearing, and more importantly, this mutual fascination is authentic and believable. We  want them to be together.  Mills' accent is cute and fetching and contributes to an air of naivete about her new land, and Walter is appropriately awkward as the young student. Lian makes fun of Dylan's lack of ideals and he tries to get her to lighten up. But try as she might her ties with family back in China work against that. Dylan however, inspired by Lian's search for meaning and blessed with the freedom of being Australian plunges into a life where he strives to realise his ideals about the environment and he  enters politics.

In time he finds that politics is a grubby world of self-interest and muck-raking that drags up innocent details of your past to make you look unfit for office. Did Lian (China) engineer the sharing of confidential information for her own gain? Has Dylan (Australia) been caught in a honey trap? Kryptonite is a complex work, and it feels important. It could easily be used as a text book for an entire course on intercultural relations or international politics. It is rich with cultural nuance and political intrigue.

Both  Mills' and Walters' performances are quite wonderful. They quickly had the audience on side, feeling their pain, and caring about what happens to them. By the time we reach the present day Dylan's future is squarely in Lian's hands. Her destiny however is constrained by loyalty to a set of traditional values that conflict with those that might bring them and their two countries closer together. Sadly, after decades of close contact they and their countries are still dancing around the cultural chasm that yawns between them, and are no closer to knowing what values really drive their respective cultures.