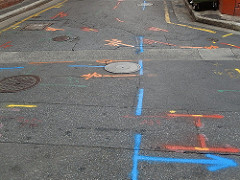 I read today – I think on the ubiquitous Facebook – that if you don’t write about what you think then no one knows what you think. That seems particularly pertinent to me now in the ‘post permanent job - pre-retirement’ phase of my life. I was an educator. I didn’t appreciate till it was all over how much I enjoyed talking to groups of people. Classes. Of course the purpose of the classes was not for me to talk, but teachers do. Inevitably at regular intervals you got to talk about what you believed and thought. It’s part of the bonding process that needs to happen between educator and students. Students need to get to know you and trust you before they accept what you say as having value. So they ask you questions. That doesn’t happen to me much anymore J
My life now has long gaps where I can’t talk to groups of people. I rarely now have classes. And I find myself wanting to say things when I don’t have a ready-made audience. So it’s a good time to start writing again. There have been multiple occasions over the last 18 months where I’ve wanted to say things about all manner of topics: the state of the Australian VET system, the whole sorry Islamist phenomenon, the continuing role of the Internet in upending life as we know it, the state of Australian political life and its corruption by the major parties, the secrets to effective management (I have just been reading Fullan on change), the drift towards the public disclosure of every facet of life in social media, why I don’t want to do that, how social media has become mainstream and has consequently lost its sense of innovation and challenge….I could go on.
I used to write a lot. I used to write dutifully for about 30 minutes each day. That’s how these pieces came into being. It used to be called journalling, or keeping a diary. As someone once commented, I blogged, as many others did, before blogging was a thing. Along the way I got waylaid by images. I became entranced by the daily posting of photos on Flickr – a disease I caught from, and am eternally grateful to, Alan Levine. The 365 project he suggested – posting a photo for each day of the year – changed my life. I became a person who preferred to express and share their life with images. It has been a joy and a revelation about the power of random serendipity. (see more here). I’ve come to realise that what I have been doing with the posting of images of my daily life is in some sense trying to make meaning of my world.
Making meaning is a common concept in many disciplines. Humans by default try and make meaning of what is happening around them, and if for whatever reason that ability or opportunity to make meaning is denied us we are not at peace. It is not a conscious process; it is just what we do if we are a healthy functioning citizen. Apart from the field of linguistics and language learning I always struggled with this concept of making meaning. I wasn’t sure what it was or if it was even necessary. It’s one of the many insights that appear to accompany the process of getting older and contemplating one’s own life coming to an end. (No I'm not dying!) I do now try and make meaning out of things; for me now it is occasionally a conscious process. I’m no longer just satisfied to just do or experience something. I want to explore why I am doing it; I want to know what it means.
It crystallised for me very clearly when I watched the Lazarus video from David Bowie on the day he died. It was inspiring to watch this work from someone who, though dying, was intent on making meaning of existence and what was happening to him for the entertainment and cultural enrichment of others. Through art. Reinterpreting the last days of his life to make it more powerful and leave us all with an instructive culture artefact rather than just tears and sadness.
I could go on…..

..... but before I go I just want to acknowledge and thank my dear friend and colleague Stephan Ridgway for the amazing work he did in the Australian elearning arena over the last 15 years. Stephan today became another casualty of an Australian VET system that is methodically disposing of anyone with a sense of innovation and who might dare to do things differently. Today was Stephan's last day at work for Sydney Institute of TAFE. As Robyn Jay wrote, "with grace he goes." 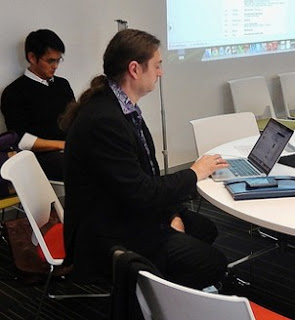