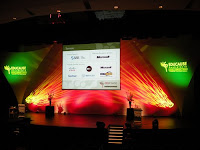 I was going to try and blog about all the sessions I attended at last week’s Educause conference but if I wait for when I have enough time to do that I’ll never do it. So instead I’m going to do a Leigh Blackall and shoot from the hip. And I’ll probably say a few things that people may not like. However....

Educause is principally a higher ed conference so most of the presenters are from the university sector. And it just has to be said. Many of the presentations were appalling. I have never seen so many ppt slides stacked with bullet points which were read to us. I couldn’t believe it the first time, and it kept happening over the 3 days. They were classic examples of what not to do and this is what has given ppt a very bad name. Where have these people been?

The worst offender was a keynote speaker from Microsoft. His presentation was salvaged somewhat when he finally got to the interesting stuff in the last 15 minutes about lifestreams. He and colleagues have calculated that we live a 4 terrabyte life! That is, if we documented everything we ever saw, said, photographed, and filmed each life would accumulate approx 4 terrabyte of data.

And while on the subject of keynotes – it is clear that the organising committee paid no mind to presentations skills when they were selecting their keynote speakers. I’m sorry, but from keynote speakers I expect some semblance of presentation skill, but some had had little or none. And DELL and VM Ware could only have got a keynote slot because they paid a bunch of money for it. They should not have been a keynote event.

There were good keynotes though – Prof Peter Reimann from the University of Sydney spoke about improving students' ability to collaborate effectively. They have developed a wonderful tool that visualizes a student’s participation in a wiki, and I’m sure would also motivate a student to participate more. (Don’t think it’s commercially available.) Leo Plugge from Holland was also engaging, and inspired envy from Australian delegates as he talked of the national initiatives in Holland to provide superfast broadband to all educational sectors. See SURF. Mr Moodle (Martin Dougiamas) gave us a glimpse into the world of Moodle 2.0 and I like what I saw. It is clearly more porous to the outside world, and among other things allows for embedding media from external sites in discussion posts. So finally we may be able to see the discussion form freed from the tyranny of written text. There is a great opportunity for the VET [Vocational Education and Training] sector here – where many students are not great readers/writers but may be quite proficient in creating social media for discussion and assessment. (Or am I dreaming?) Michelle Seliger from Cisco was great too – delivered a strong message on Innovation, Collaboration and Partnership. (Though I did arrogantly think that she was basically delivering the same ideas in keynotes I have given in China and India over the last 2 years.)

Re concurrent sessions, apart from the 'read the ppt dot point bores', Rob Phillips from Murdoch University gave an engaging session where he sadly delivered the message that the use of technology had not yet transformed the nature of teaching and learning. (Should it? Will it?) This message was echoed by Martin D – he says that 90% of Moodle courses around the world consist of nothing more than static content and the occasional token nod to a broadcast style forum (i.e. non-interactive). Garry Allan from RMIT also gave a great session on eportfolios (they are FIRMLY on the agenda – a total of 5 sessions on this topic at the conference) where he talked about the Uni of South Australia and RMIT eport partnership. He asked whether asking students to conform to a one size fits all epf was sustainable in a world where tools are changing so quickly and students are likely to have artefacts spread all over the web in various blogs, wiki, social networking suites, etc. (Frankly I don’t think it is but I like the development of tools like Mahara, and can see them being really useful for many students when it is fully integrated into Moodle 2.0)

There were some other good concurrent sessions too, but these are the ones that stand out without having to go back and check my notes. And if I wrote about all of them I’ll never finish this. Pru Mitchell from ed.au was good on Sustaining Social Networks (“Web 1.0 was organised around pages; web 2.0 is organised around people.”) Peter Tregloan (Uni of Melbourne) was refreshingly honest about their Chemistry Flickr project – staff were positive about the project but many students did not think using Flickr was particularly relevant or useful. Kathleen Bacer (Azusa Pacific Uni) gave an energetic presentation on using Visual and Auditory Tools to Engage 21st C Learners, and urged us all to “break the online silence”.

Twitter is almost as common as the daily paper these days and there was a coterie of around 20 'tweeters' communicating on the back channels. Personally it really added to my enjoyment and appreciation of the conference and issues raised, but there was a strange moment during one presentation where comments on the Twitter stream started to get a little critical. Not long after there seemed to be a collective realisation that this was a little weird (unethical?) to use the backchannel to knock someone up there talking to you who has no idea that it's going on and the critism petered out. But it begs the question - is this legit behaviour for people using Twitter and other live blogging tools like Cover It Live? In this day of the backchannel should speakers realise that it is a possibility and maybe have an 'ombudsman' in the audience to keep them in the loop?

Overall I’m glad I went. It crystallised a lot of ideas for me about where VET stands in relation to other sectors, and their use of web-based technologies. So much so that I scrawled 3 pages of notes on the plane on the way home about a keynote that needs to be given called VET and the NET. :)
at May 12, 2009 6 comments: