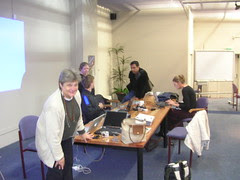 DSCN2818
Originally uploaded by mikecogh.
Bee (Barbara Dieu) packing up at the end of our first day in Dunedin.
at September 21, 2006 No comments:

Invite a group of elearning experts to gather in one place to take part in an unconference on the Future of Learning in a Networked World and the rest will take care of itself. Konrad Globowski, Teemu Leinonen, Barbara Dieu and I spent several hours wandering around Dunedin yesterday discussing what might happen at such event. We questioned each other about why we had been invited, and how we might present ourselves and our work at such an unstructured event.

There was a level of uncertainty at how one might ‘present’, or not present, but the conversation naturally turned to many of the issues that resulted in the need for this kind of event. In essence it is to present an alternative model to the stand and deliver model of the typical conference, and that typifies so much teacher methodology in classrooms. With a new breed of technological tools available that encourage personal publishing and collaborative learning among groups of connected learners it is timely to offer another way of offering professional development that more closely mirrors what might be regarded as better practice for teaching in a networked world.

Fragments of the conversation as we walked included:

Konrad: the creative aspect is key. Blogs, wikis, repositories for self-created media like YouTube and Odeo offer free publishing and storage of student work that can be used for self-expression, connecting with like-minded students, and even assignments set by imaginative teachers, and that engage students in ways that traditional text based or rote learning may not. The urge to create and make sense of the world through self-expression in various media is a natural human urge and not typically found in average courses. (I didn’t have one art lesson in my entire school life.)

Teemu: the railway is a symbol of how connection was expressed in previous eras. In particular, the grandeur of the Dunedin railway station is indicative of its importance at the time. These days connections via the Net join more people across time and space than railways ever could.

Later in the day the entire unconference gang gathered at a Maori marae. Caroline bemoaned the reduced importance of physical place in the new networked world. She wanted her children to feel grounded and know where they come from. I suggested that this notion of place has indeed been reduced in importance, and had been counter balanced with the ability to know people far away from your neighbourhood – people who you perhaps had more in common with than the people who lived next door. The concept of virtual place is now a reality, and rather than detract from my sense of being grounded in my home location, my attachment and enjoyment of home has been enriched by global connections made possible by the Internet. “Home is the where the Internet is.”

Teemu : it was only when he realised that he could use them to communicate with people elsewhere that he became interested in them. This initial intrigue has resulted in him taking a path where he has developed a sytem of communication between a mobile phone and wikipedia. Using this system you can ask for wikipedia for an entry on a particular topic and it will call you back and read back the entry on your queried topic.

Konrad wanted to do his Ph D on the role of blogging in forming communities for year 8 students. When he presented his proposal to his review committee they asked what previous research had been done on this topic. Of course there is none (because it is a new field) and they were consequently not keen to approve his topic. Such courses of higher study are normally assumed to be based on the work of other scholars, and approved on that basis. This is another example of how new tools and approaches (blogging for example) are challenging accepted practice in education. The educational world is now a place where knowledge is being created and distributed via egalitarian networks without a role for the traditional gatekeepers. Published academics are no longer the people you would seek out if you wanted information on most recent good practice in elearning.

So before this unconference had begun, the conversations had already covered:

The learning and discussion on the future of learning had begun in earnest without a single presentation!
at September 21, 2006 1 comment: DSCN2794
Originally uploaded by mikecogh.
Yep - Bee and I are both in New Zealand for the 'unconference'.

We spent some time this afternoon at language school talling about blogs, community, role of the teacher, personal publishing, etc

The First Day in Dunedin

Some thoughts on this before we begin:

A sample Digital Story
at September 03, 2006 No comments: