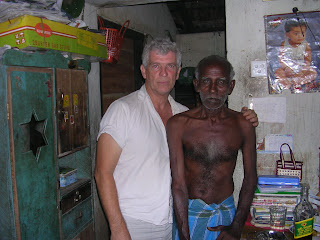 Firstly, I stand by what I said in my previous post. Further observation and conversations with others corroborate what I said – Sri Lanka is slipping behind other countries in Asia. The civil war cuts down the numbers of tourists and deprives the nation of what was a profitable stream of income, and any excess government cash goes on the military. And then there was the tsunami. It was clear too that as one got further from Colombo that conditions improve. But….

I took the train like I used to – a second class pit of dirt and heat. At least when the train was moving you had moving air on your face if you had a window seat. Tuk tuks were lined up at Weligama station on arrival (they didn’t exist in the villages before) and one whizzed me to the Bay Beach Hotel. And I set off on my pilgrimage to 26 years ago. I hadn’t walked 5 minutes when Lalith, a young man on a bicycle, asked me where I was from, what was I doing etc. He knew Jyothi Pala, and took me to his house. Long and very pleasant story – we all wanted to believe we knew each other and we agreed to make contact next day, but I wasn’t convinced. Lalith said he also knew Walter – he lived next door to a wine shop. We continued there on his bike, me riding donkey. We stopped outside the house. I saw Walter and I knew it was him, Titus brother. I greeted him with tears streaming down my face. Through the mists of time it dawned on him who I was and a smile broke through. Words can’t explain the happiness and intensity I felt. Somar, Walter’s wife appeared and verily screamed when she saw me. She knew who I was. Out came the photos and there was lift-off. A coffee, happy conversation in broken English, we shared our memories in words and looks and eventually got to the topic of the tsunami. Walter and Somar had avoided it because they were inland at their daughter’s house when it happened. But it took everything they had except their house. The wave lapped the ceiling and deposited a one metre layer of back mud throughout their house.

They invited me back for lunch the next day and I walked out into the street. I got no more than a few metres when a woman walked up to me and said ‘You know Lou!” “Yes.” Mayhem. Photos again. Bubbling conversation. The name Titus was spoken. A man behind me said “Titus my friend”. I turned to him and said “Titus was my friend too” and I realized who it was. It was the real Jyothipala. Again a flood of tears – not from Jyothi – just a look of warmth and empathy that was his trademark. The woman who recognized me was Champa, his daughter, and she spoke fondly of Lou and Nanette. We went back to Jyothi’s house and it was just like 26 years ago. Friends and extended family everywhere. The photos did another round and one by one people started identifying themselves or others in the photos they knew as kids. And then came the first really sad tsunami story. Jyothi’s delightful intellectually disabled son died that day. The rest of the family were out when the big wave came and wiped out half their house.

Others on the roll call – Eden died several years ago of a heart attack. Nandi in a car accident. Lillian lives in Colombo and all the kids are well and employed. A couple of people told me the boys were tall and handsome (“just like Titus!”) and working in banks.

Jyothi and I then went down to the beach to see where the old cadjan huts, Titus’ and Walter’s, used to stand. Not a trace of them. Now just a busy bus stop. But they weren’t taken in the tsunami. There had been recurring storms and high tides over the years that frequently damaged these houses and the local government decreed that they be removed and everyone relocated. Good thing too given what happened further down the track.

I had one more thing to do before my pilgrimage was complete. I wanted to go to Titus’ gravesite and formally bid him farewell. Jyothi, me, and one of his daughters (Genaderie) went there by tuk tuk next day only to find that the site where Titus and others were buried had been reclaimed and built upon. This apparently happens in Sri Lanka if you are buried on public land.

So a little while ago I stood outside the hotel, looking out over the bay, and thanked him for the huge role he had in my life for a short time. He was a teacher to me, before I ever was.

I’m going back to see Jyothi and Walter and families tonight, and will spend time at both their houses watching the cricket. An amazing coincidence has Australia and Sri Lanka playing off in the final of the World Cup. I think I hope Sri Lanka wins!

So it’s done. I’ve shed the tears, shared the joy, and thanked people for their incredible kindness all those years ago. I think they know now how much it meant to me – and Lou, and Nan, and Pete Brennan, Minou, Pete and Sue, Jean-Pierre, Frank. They had a huge impact on many lives many years ago. I can let this go now. It’s been something I’ve been holding on to for 26 years. 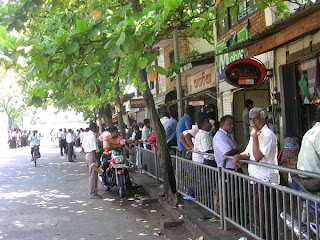 Sometimes a lot changes in 25 years. Sometimes the fact that nothing changes can be the problem. There is evidence of both in Colombo as seen through the eyes of someone who last saw the place in 1981. A lot of what hasn’t changed is the result no doubt of being riven by civil war. The main part of town, Fort, is a high security zone – the Tamil Tigers have left their mark here. Bombs have left buildings destroyed and lots that once had buildings on them are left empty. Those buildings that do remain in Chatham St are left to rot – there’s no investment in an area that has few people filling it. The Pagoda Café was an icon back then – a stylish model of old-world charm that had the place thriving. People flocked to the Pagoda for the ambience, and the instant plate of cakes that arrived as you sat down. They, sadly, don’t do the plate of cake thing anymore. You have to go the counter and choose what you want like you do in normal places. But the Pagoda wasn’t normal. That was the whole point. And there’s not much point anymore. One waiter in the full length white attire (when there were once 6 – 10 of them) goes through the motions. The fans still turn and keep the place relatively cool but they are about the only thing providing any buzz.

The Pagoda’s neighboring buildings are all run down or half used. The traditional heart of Colombo is dead. I wasn’t able to record any of this with photos because of the ‘high security’ status of the area – no photos, no videos.

Elsewhere in Colombo I have been surprised at how poor the place looks. I don’t remember it looking like that. In ’81 Sri Lanka was considered one of Asia’s more comfortable nations – real poverty and hunger were scarce. People in the main still look well-fed, but it’s the infrastructure that’s suffering. The lack of paint, the overflowing open drains, the giveaway smells coming out of small laneways, rubbish on the streets, broken windows.… The typical little roadside stalls have a touch of well-being about them in downtown Saigon, or in Kuta and environs in Bali, but not here. It looks depressed. It’s as if no money’s being coming here and nothing has been spent on the basics for a long time. It could be that in ’81 Sri Lanka seemed fairly comfortable compared to other Asian countries, but it’s marked time and its neighbors have progressed. You can probably put all this down to the civil war.

One charming custom hasn’t changed. As you walk along Galle Face Green (under the watchful eyes of soldiers) young lovers still huddle under parasols on the park benches by the seafront. It’s the guy’s job to bring the sunshade to keep the one he’s courting sheltered from the surging sun, and it enables couples to steal pecks and kisses out of the sight of prying eyes of those who wander by.

Meanwhile, the soldiers train their eyes out to sea to make sure we don’t get any unexpected surprise from the Tigers. And in a lovely mash-up of commerce and military, they sometimes use the booths of companies like Commercial Leasing (who must have practiced there in the past) as their observation points. So heavily armed soldiers look like they’re at a trade show ready to answer your questions and lend some advice about your financial future, but I doubt they’d get the joke.
In other areas much has changed. The hotel I’m staying in for one. It’s all a Western traveler could ask and the price is fine. WITH IN-ROOM BROADBAND!!! at a reasonable extra charge. There’s now a World Trade Center for heaven’s sake. And yes that’s what it called, and it has twin towers. So money is being spent on development at the top end of town, but I haven’t seen much evidence of the average punter getting much leverage out of it. But I’ve only been here 24 hours and may not know what I’m talking about! :)
at April 25, 2007 2 comments: 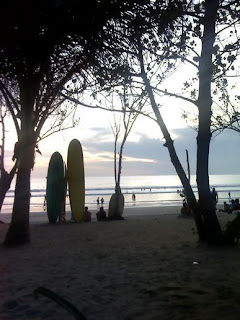 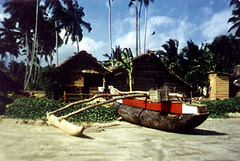 Houses
Originally uploaded by mikecogh.
Alex is at this moment on a bus traveling to inland NSW. My son is somewhere in the ACT camping out while building a structure somewhere that will replace something that went west in the ACT bushfires. My brother is somewhere in the red centre in the Uluru region. And I’m at my desk at home. Happily. Partly because I’m about to join the travelers. In a couple of days I’m going here - Weligama - a place I visited several times 25 years ago.

25 years ago I traveled with nothing that needed plugging in. Now I have to check here to make sure I’m prepared. Make sure that I’m able to connect and share. I will read what you have to say when I’m half a world away. I will share pictures and words from where I am. 25 years ago I’d happily be out of contact with everyone I knew for weeks. But times have changed. My phone will beep on arrival in Sri Lanka telling me I’m connected. Hotel rooms in Colombo will have Internet. There’ll be Internet cafes in the villages. I can post images, movies, and audio to the Net from my phone.

I will post content to a collection of sites that may not be compliant, probably break laws of copyright, and I will engage in debate and discussion about learning in between swims and seeking out old friends. I won’t be enrolled in any course but I’ll be learning because I’m networked. Happily. I’ll be engaged. It will just seem natural to continue the conversations from a place far removed from the desk I sit at now. And I know I’m not alone doing this. The world has changed……. 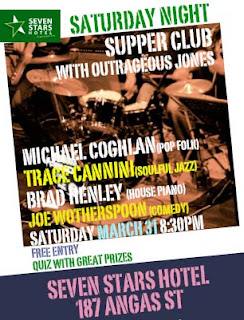 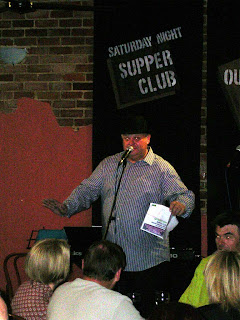 Above: the host for the evening, Outrageous Jones, keeps things flowing.