I’ve been a-wandering quite a bit later, and along the way there have been 2 conferences – the ED-MEDIA Conference in Lisbon, and the annual Australian Moodle Moot in Sydney. Having been in the elearning game for 14 years now it gets harder and harder to learn much from the average conference presentation. I go mostly for the keynotes. Two of the keynotes at ED-MEDIA were excellent. 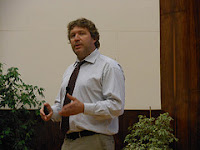 George Siemens was there heading the research stream, and as ever, George presents new perspectives. It is the fourth time I have heard him speak now and he always has something new to say, unlike some keynote speakers who can present basically the same thing years apart.

George's presentation was aimed at researchers and how they might use the open web and social networking tools. He asked how do you get greater impact: publishing on YouTube a la Mike Wesch, or via the traditional means and publish in journals? He acknowledged that for younger academics still establishing their reputation and tenure, it might be unwise to go down the Mike Wesch route, but older established academics could follow the lead of people like Terry Anderson from Athabasca who will only publish in open journals.

He added that if you want to increase your profile then the information that shows up about a researcher on a general Google search is more important than the 'academic you' that is uncovered by a search on Google Scholar. He added that the profile that he himself now enjoys began by blogging

Another really engaging session was from Alan Law from the Open University UK. He replaced Denise Kirkpatrick who had double booked, but it actually wouldn’t have mattered who had done the presentation – it was more about the wonderful work the Open U does and it left me thinking how much I’d like to work for them. Such simple and engaging ideas. Eg entertaining animated cartoons on YouTube about lying that outlines the various philosophical standpoints one can take in relation to telling lies with a strategically placed ‘would you like to know more “ link close by that whizzes you off to the further info and enrolment pages for their philosophy courses. Smart.

There are no entry requirements for OU courses and still they manage to be among the top 5 unis in the UK for successful outcomes, and for research. Quite a remarkable success story.

Another initiative that really appealed to me was their iSpot program. Designed to get people interested and form communities of practice around local flora and fauna by photographing relevant subjects and posting to the iSpot site, it coincides with my new obsession for taking photographs and sharing them on Flickr. They are looking to expand the program beyond the UK, and perhaps beyond just flora and fauna, so I will be keeping an eye out for this in my neighbourhood. 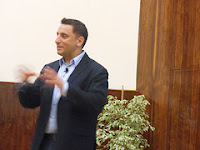 Alec Couros was also on the keynote bill. I had heard Alec talk online before so I knew he’d be good, and he was. But I did find myself thinking that I knew several people who could do the job just as well but who don’t have the profile. And they’d be much cheaper. [Please see comments below for more on this.] I don’t think he made a convincing case to support his keynote title either – Why Networked Learning Matters. His summary slide seemed to consist mainly of loaded statements that are easily contested. Eg networked learning promotes ‘open access’ and have ‘high impact’. Whether I agree or not is not the point – offering open access as a reason for networked learning just describes it; it doesn’t explain why it is a ‘good thing’ or why it matters. Someone could just easily read that open access is connected to networked learning and conclude that it is not what they or their students want. “High impact”? On whom? Or what?

Another example – courses become ‘shared, non-local, learning events.” Again, this is a description, not an argument for why it matters.

Another person I saw present was Bert Kimura. I worked with Bert a few times in the early days of the TCC online conferences out of Hawaii, of which Bert is the pioneer, so it was good to share the same physical space with him. 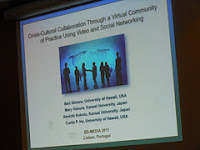 Bert and team were reporting on a project that looked at Cross-Cultural Collaboration using video and social networking. Interesting to hear about, but like so many presentations from Higher Ed folks that report on research it was based on a very small number of participants that doesn’t allow anyone to make any valid conclusions about its usefulness for bigger numbers of students.

In contrast the keynote speakers at this year’s Moodle Moot were disappointing for me. For Mary Cooch (the keynote on day 1) however, the Twitter stream apparently was in general very appreciative. Somewhere between 70 and 90% of delegates were attending their first Moodle Moot (this was the third) and it could be that a great majority of those first time attenders are reasonably new to elearning. For them Mary’s address may well have been right on the mark.

It’s interesting after a conference to simply see what you remember what was of value without referring to any written notes. In this case just 2 things stand out:

1) Mark Drechsler from NetSpot’s excellent session on the new approach to files in Moodle 2.0 (No longer any central file manager; files will need to be stored in a Content Management System [CMS] like Equella, or Alfresco [OS], or elsewhere in the cloud.

2) The fact that several organisations have installed Big Blue Button on local servers and are supporting it to become the Open Source alternative to dear departed Elluminate which has been sadly bought by Blackboard. (I thought the moment that Elluminate went t o the dark side that one of the positive outcomes from this would be that an OS product would grab the chance and seize the mass market deserting Elluminate. It would be nice to see a mature OS virtual classroom product integrate with Moodle. It will happen. It’s just a matter of time. And it could well be Big Blue Button.)

There was much more but that's all I have time for right now :)